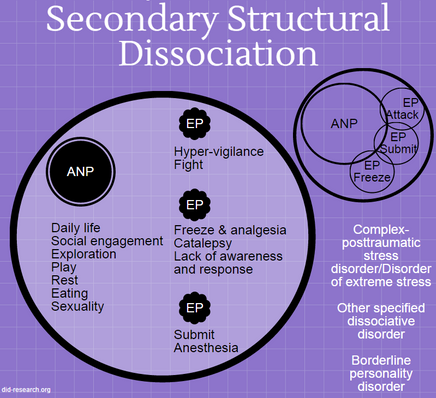 When trauma begins at a young age, lasts longer, is perpetrated by a family member or guardian, or involves more extreme disorganized attachment, the theory of structural dissociation posits that primary structural dissociation may not be enough to allow the individual to handle all of different aspects of trauma that they are being exposed to. Trauma that begins at a younger age affects a less integrated personality, trauma that lasts longer requires more traumatic materials to be contained, trauma that is perpetrated by someone who is supposed to protect the vulnerable child creates a strong motivation to remain unaware of the trauma during daily life, and trauma that is accompanied by disorganized attachment forces the child to react in conflicting ways to a caretaker without allowing any of their other learned responses to shine through. When some or all of these conditions are met, the result might be complex-posttraumatic stress disorder (C-PTSD), borderline personality disorder (BPD), or other specified dissociative disorder (OSDD-1). Though the trauma may not be enough or the individual young or dissociative enough to produce multiple apparently normal parts (ANP), multiple emotional parts (EP) are the cause of these disorders.

Adults who developed complex-posttraumatic stress disorder most often do so due to prolonged or repeated traumas such as war, political torture, prolonged captivity, or genocide. Childhood trauma also greatly increases the risk that further trauma will lead one to develop C-PTSD as an adult (Cloitre, Garvert, Weiss, Carlson, & Bryant, 2014).1 This is known as double emotion when reactions to new trauma are intermingled with unresolved past traumas, and it can re-evoke old EP or increase the number of existing EP. Those with C-PTSD experience their parts in a similar manner as do those with posttraumatic stress disorder (PTSD). The ANP of the individual remains numb and avoidant until something triggers out one of their EP, at which point the EP will react according to their specific contained materials. However, the ANP of an individual with C-PTSD is likely to have more maladaptive coping mechanisms. Projection, identification with the perpetrator, holding positive feelings towards the perpetrator, or being obsessed with revenge on the perpetrator are common and may be expressed within multiple EP.

As with EP in primary dissociation, EP may take full control of an individual with C-PTSD to result in a fully experienced flashback and subsequent amnesia. Partial intrusions of EP may cause dissociative symptoms, difficulty attaching to others, and a preoccupation with perpetrators that may be either sympathetic or vengeful in nature. ANP avoid both partial and complete intrusions of EP by avoiding stimuli that might cause their activation.

Borderline personality disorder is in some ways similar to PTSD and C-PTSD and is often associated with childhood trauma and dissociation, though not all individuals with BPD have experienced trauma or are dissociative. Symptom presentation for individuals with BPD can vary as only 5 out of 9 possible symptoms are required for a diagnosis. However, "a pervasive pattern of instability of interpersonal relationships, self-image, and affects, and marked impulsivity" (American Psychiatric Association, 2013)2 are the main features of BPD, and these symptoms are heavily linked with problems with self-regulation, self-mutilation, fear of loneliness, and a sense of emptiness. The theory of structural dissociation accurately describes these features.

Individuals with BPD have EP that handle both attachment and detachment, idealization and devaluation, as both of these patterns of thinking, feeling, and reacting are necessary for a child whose caregiver alternates between support and emotional unavailability, neglect, or abuse. This leads to an unstable identity as the conflicting EP intrude upon the ANP. Intense and tumultuous interpersonal relationships combined with fear of abandonment result from the caregiver never modeling healthy attachment, the caregiver not offering the level of attention, affection, and support needed by the child, and the caregiver's unpredictable rejection. Regressive (childish) behavior in those with BPD often reflects an EP that is frozen in time. Difficulty with emotional regulation and temper relate to the ANP dismissing the emotions of the EP which, upon activation, react upon the extreme feelings which are usually denied to them. This inability to regulate emotions derives from the individual's primary caregivers never teaching them to identity or manage these emotions. Impulsive and self-harming actions arise as an alternate way to handle intense emotions and potentially due to unacknowledged parental criticism, rejection, or hostility. Transient dissociation and paranoia are reactions to extreme unmanaged anxiety or intrusions from EP, and dissociation may be expressed as a negative symptom of the ANP (Mosquera et al., 2014).3

Other symptoms of BPD are explained by structural dissociation as well. For example, common symptoms of BPD are chronic feelings of emptiness, loneliness, and boredom. For individuals with borderline personality disorder who have strong EP but a weak central ANP, these symptoms may be the result of the ANP containing comparatively little when not joined by EP and of ANP having to avoid so many emotional and situational triggers that might activate EP. On the other hand, some of the impulsivity of BPD might result from individuals attempting to force out EP in order to feel more complete and whole. Self-harm has been known to be used as an attempt to decrease dissociation.

Other specified dissociative disorder subtype 1 is the most complex of the disorders that fall under secondary structural dissociation of the personality. OSDD-1 is very similar to DID in many ways, and it does not always fall neatly under secondary structural dissociation as what differentiates it from DID is the absence of amnesia or fully differentiated parts, not the number of ANP present. Theoretically, someone with OSDD-1 should have only one ANP and multiple EP, though in reality, this is not always the case. Regardless, the EP for an individual with OSDD-1 will likely be better developed and differentiated than the EP present in other primary and secondary structural dissociation disorders, though they might still be less developed than the EP for individuals with DID. EP for those with OSDD-1 can range from the traumatic containers found in C-PTSD and BPD to fragments with some concept of differentiation to fully developed alters with their own developed idea of self. EP for those with OSDD-1 may handle some aspects of daily life such as exploration or play. They commonly perceive themselves as children. They can either manifest through passive influence or, when in a safe environment or when triggered, through a full switch. The parts of those with OSDD-1 may deny each other, deny each others' memories, or deny aspects of the body's physical form or current situation. Not only is the ANP avoidant of EP and liable to react to EP with shame, blame, or hatred, EP may avoid each other.

Individual EP may be focused more on defense through fight, flight, freezing, or submission, on specific emotions, or on specific types of attachment. It's common for EP to present in a stratified manner, with one or more EP presenting with their trauma as the previous EP and their trauma are processed and integrated. Multiple EP are often grouped according to the types of trauma that they experienced, with some EP even having experienced different aspects (sites, sounds, emotions) or being created to contain different defensive actions associated with the same trauma and traumatic memories. Some traumas might be associated with an experiencing part who registered the sensorimotor and affective elements of the trauma and with an observing part who witnessed the trauma from within or during an out-of-body experience. The observing part might present as emotionless and detached and is associated with the concept of an internal self helper.