Two or more conditions are comorbid when they occur at the same time within a patient. Comorbid conditions often interact with each other to aggravate the others’ symptoms yet remain independent of each other. Dissociative identity disorder (DID) is often comorbid with many different disorders because of the traumatic and highly stressful circumstances that cause it. Trauma, especially child abuse, is known to cause multiple adverse effects later in life, and someone who is genetically predisposed to a disorder but might not necessarily have developed the disorder otherwise is more likely to have the disorder expressed if they survive trauma.

DID is most commonly comorbid with posttraumatic stress disorder (PTSD), a trauma- and stressor-related disorder that, like DID, is often the result of child abuse. In fact, DID and PTSD are so commonly comorbid that some have speculated that DID is actually an extreme version of PTSD or that both fall on the same spectrum of structural dissociation of the personality. Others claim that DID is more commonly associated not with PTSD per se but with complex-posttraumatic stress disorder (C-PTSD) due to the extreme and chronic interpersonal trauma that typically causes it.

Somatic symptoms are also commonly present alongside DID. These involve seemingly physical symptoms that are not due to a physical disorder, such as muscle aches or an upset stomach. Similarly, many individuals with DID have functional neurological (conversion) symptoms, which present as symptoms of a neurological disorder that is not medically present. In non-Western settings, this often presents as non-epileptic seizures, and in Western settings, this may present as headaches, seizures, or symptoms suggestive of disorders such as multiple sclerosis. Somatic and conversion symptoms are classified as dissociative in nature.

Another disorder that is commonly comorbid with DID is borderline personality disorder (BPD). Like DID, BPD is commonly attributed to childhood trauma, disorganized attachment, and structural dissociation, though it is thought to have more of a genetic basis. DID is sometimes accused of being the same condition as BPD, but there are many individuals with DID who do not fit the criteria for BPD. Frantic efforts to avoid real or perceived abandonment are particularly uncommon in DID; in fact, avoidant personality disorder symptoms and social withdrawal are much more common. In contrast, some individuals with DID only display borderline symptoms (such as self-injury or mood instability) in times of extreme stress. Obsessive personality traits are also common, and a minority of people with DID display histrionic, antisocial, or narcissistic features.

Like depressive and bipolar and related disorders, anxiety disorders are also often seen alongside DID due to being triggered by trauma and stress. Though PTSD triggers are separate from phobias, an individual with DID might additionally have non-traumatic phobias due to having learned how quickly seemingly innocent situations and objects can turn harmful. Fear of punishment, judgment, or ridicule by parents can encourage social phobia, or social anxiety disorder. Generalized anxiety disorder is extremely common even in the general population, so it's no surprise that individuals who have likely experienced high betrayal and pervasive lack of safety might be especially prone to it. Agoraphobia might take root similarly. Many alters in particular suffer from selective / situational mutism due to threats made regarding what would happen to them if they ever spoke of the trauma that they survived.

Although the presence of a feeding and eating disorder does not indicate abuse, feeding and eating disorders frequently follow abuse, trauma, or high levels of stress. Pica in particular is a sign of neglect, and both anorexia nervosa and bulimia nervosa can indicate an individual's attempts to gain control over their life and body or shame over their body due to child abuse, particularly childhood sexual abuse. Some individuals may also binge eat in a conscious or unconscious attempt to make their body unattractive to sexual predators.

Finally, although research on neurodevelopmental disorders as a risk factor for dissociative disorders is still in its infancy, this topic is summarized due to a combination of high levels of interest from autistic adults and the website author's personal research focus.

DID can often be seen alongside obsessive-compulsive and related disorders, but this combination is not discussed here.

Although DID can be comorbid with schizophrenia spectrum and other psychotic disorders, it is still highly debated how to describe presentations with combined dissociative and psychotic features, and so such disorders have not been detailed here. Dissociative psychosis is possible for individuals who have DID, and this can be diagnosed as brief psychotic disorder. This might be especially common for individuals from highly violent, chaotic, or oppressive communities. 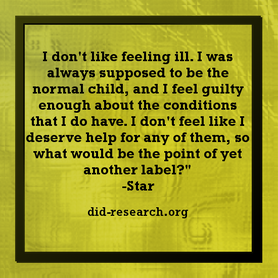