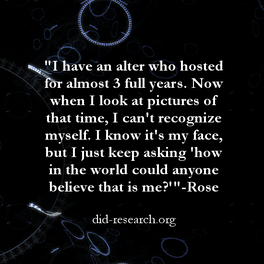 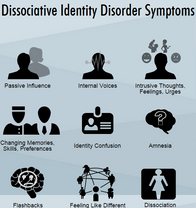 Dissociative identity disorder (DID) is best known for alters, dissociated parts of the personality that the individual with DID experiences as separate from themself. However, prior to diagnosis, many individuals with DID are aware of the effects of having alters but not necessarily of their actual alters. Individuals with DID have dissociative amnesia for both their traumatic past and for many of their alters' activities (inter-identity amnesia), and they often experience other memory problems as well (Dell, 2006)1. They might find evidence of amnesia such as possessions that they do not remember obtaining, art or writing that they do not recognize having done, being called an unknown name by strangers who act in a familiar manner towards them, or being confronted about their supposed actions that they cannot remember. Sometimes, they might experience dissociative fugue and suddenly find themself in a different location with no explanation of how they got there. There might be periods of their life that they can’t recall. Conversely, they might experience flashbacks of traumatic events and then find themself unable to recall what they just remembered (American Psychiatric Association (APA), 2013)2.

Individuals with DID might experience more direct evidence of their alters as well. They might hear "voices" that they do not at first understand are originating from their alters. They might experience intruding emotions, sensations, thoughts, and urges that make no sense to them and do not feel like their own. They often find themselves doing or saying things that they didn't plan to do or say, and they might sometimes feel like they're watching their body do things that they can neither predict nor control. Their skills and abilities might fluctuate, as might their knowledge. Their preferences, perceptions, and memories shift between sets (Dell, 2006)1.

DID includes a range of other dissociative symptoms as well. Identity alteration accounts for the existence of alters, but DID also involves high levels of identity confusion (being unsure who one is), depersonalization (feeling disconnected from aspects of oneself, including one's emotions, thoughts, memories, physical sensations, body or parts of one's body, or identity), and derealization (feeling disconnected from one's environment or feeling like nothing is real). This can manifest as the individual: feeling like their body is foreign and not really theirs; feeling like they've morphed to a different age, gender, or build; not recognizing themself in a mirror; feeling like an imposter who's taken over someone else's life; or feeling like everything that's happened to them is just a script for a movie. Individuals with DID can also experience: trance states, in which they show minimal awareness of or ability to respond to their surroundings; perceptual disturbances, such as feeling as if sounds are coming from far away; and somatic symptoms, such as stomachaches, headaches, or joint pain in response to emotional stress (Dell, 2006)1. DID is so strongly associated with dissociative symptoms that a diagnosis of DID renders any other dissociative disorder diagnoses unnecessary.

"I have an alter who hosted for almost 3 full years. People knew her instead of me. She self harmed and had a severe eating disorder. When I was able to take control again, I was severely underweight and covered in scars. It was shocking. Looking in the mirror was painful because I couldn't recognize my own face or my own body. Now when I look at pictures of that time, I can't recognize myself. I know it's my face, but I just keep asking 'how in the world could anyone believe that is me?'"