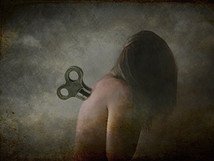 Depressive disorders are characterized by "sad, empty, or irritable mood accompanied by somatic and cognitive changes that significantly impact the individual's ability to function." The disorders within this category are differentiated by "duration, timing, or presumed etiology."

Symptoms of major depressive disorder include 5 or more of the following: depressed mood; significant weight loss or gain or change in appetite; insomnia or hyposomnia; observable restlessness or slowed movements; fatigue or loss of energy; feelings of worthlessness or guilt; a diminished ability to think, concentrate, or make decisions; recurrent thoughts of death or suicide.

Symptoms of dysthymia are persistent and include a depressed mood and two or more of the following: poor appetite or overeating; insomnia or hyposomnia; low energy or fatigue; low self-esteem; poor concentration or difficulty making decisions; feelings of hopelessness.

Bipolar and related disorders are similar to both depressive disorders and schizophrenia spectrum and other psychotic disorders in terms of symptoms, family history, and genetics.

Bipolar II disorder used to be thought of as a milder version of bipolar I disorder, but many individuals with bipolar II disorder spend a lot of time in depressive episodes, and the disorder is associated with serious impairment in work and social functioning.

Cyclothymic disorder is more of a truly milder version of the bipolar disorders because it is characterized by at least 2 years of both hypomanic and depressive episodes without ever fulfilling the criteria for mania, hypomania, or major depression.

A manic episode is defined as "a distinct period of abnormally and persistently elevated, expansive, or irritable mood and abnormally and persistently increased goal-directed activity or energy." A hypomanic episode is similar to a manic episode but lasts only 4 days instead of a week (though any length of episode counts as manic if it requires hospitalization).  In contrast, a major depressive episode is defined by a depressed mood or loss of interest or pleasure in addition to another 4 out of 9 possible symptoms such as those specified in major depressive disorder.

All information taken from the DSM-5.

We were diagnosed with major depressive disorder a few years ago, but we've been struggling with it for far longer than that. We've learned how to recognise and respond to the thoughts caused by this, but the sleeping issues are bad. We can easily spend up to two hours just getting lost in all the thoughts, all the responsibilities we have and what may go wrong. Those thoughts come back during the day, which makes deciding anything impossible.