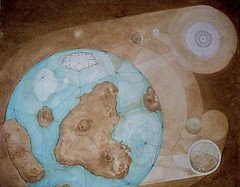 Many individuals with dissociative identity disorder (DID) have an internal world in which they or their alters can manifest as themselves and interact. These internal worlds, which are also known as inner worlds or headspaces, can range in size and complexity. A system with only a couple of alters might have an internal room in which alters that are internally active, awake, and aware might manifest. Others might expand this living room to include doors to bedrooms for groups of or individual alters. Some systems might have an entire house that is fully equipped with everything that the alters would feel that they need.  Others might have small towns that may even be filled with static "NPCs" (taken from the roleplaying term "non-player characters") that can interact with alters but themselves are more similar to imaginary constructs than to actual alters or fragments. Even more expansive internal worlds can result when highly imaginative or dissociative systems use their inner world to retreat from the outside world and so play out entire stories within their mind. Alters may be perceived as having internal lives when not active in the outside world, and these inner lives may involve travel to other internal locations.

It should be noted that because internal worlds are not objectively real, some subjective experiences of them may not be as concrete as they feel. For example, an alter that is harmed or even "killed" internally has not taken any actual damage and can still front, or access the body while to some degree aware of the outside world, as before when needed. Alters who have jobs or skills inside will not actually have these abilities unless they learned them from valid sources in the outside world. Many internal happenings may be metaphorical or highly symbolic. As well, the brain is not capable of running a completely independent parallel track inside for every single alter who is active within the internal world. It is more likely that internal happenings are recreated "false memories" that are accessible as the alters involved connect with the front of the body and mind (become active in such a way as to be aware of or capable of interacting with the outside world or connect with other alters who are currently capable of such).

That such internal environments are possible for individuals with dissociative identity disorder is well known and accepted in clinical and academic environments. For example, "The Haunted Self' by Onno van der Hart, Ellert R. S. Nijenhuis, and Kathy Steele includes information about how alters can interact internally and sometimes never take active control of the body. Within this internal environment, alters may soothe each other or reenact trauma to cause subjective internal injury. Traumatized child parts may perceive themselves as eternally hiding within a closet or locked within a metaphorical dungeon. These worlds might be filled with symbols of the system's pain and suffering. On the other hand, internal worlds may also be places of magic and fantasy, fulfilling the system's need for a place in which alters can retreat when the outside world becomes overwhelming. Alters may perceive this internal world as real as or even more real than the outside world (Hart et al., 2006).1

Internal landscapes are also referred to within "Dissociation and the dissociative disorders: DSM-V and beyond" by Paul F. Dell and John A. O'Neil.  This text refers to internal worlds as "common internal reality or landscape or inscape" in which alters reside. It attributes the existence of internal worlds to a shared autohypnotic effect between alters that can sometimes be created by clinical hypnosis and is "distinct from external reality, dream, fantasy, or posttraumatic hallucinatory flashback." Internal worlds are viewed in the same manner by all of the system's alters, each of which usually has a unique personal appearance within the inner world.  Internal worlds display continuity over time and allow for events to occur and be met with their logical effects. Accordingly, internal landscapes are seen as a sign of internal unity underlying external multiplicity and fracture (Dell & O'Neil, 2009).2

We have different worlds, all with barriers between them. Only select alters are able to go from one to another, but it doesn't usually happen. These barriers exist so memories and emotions don't bleed through to others, we believe. It can be hard to communicate this way, but for now (when we still need to do a lot of trauma work) it's neccesary.