The DSM-5 gives the following criteria for a diagnosis of dissociative identity disorder:

E. The symptoms are not attributable to the physiological effects of a substance (eg, blackouts or chaotic behavior during alcohol intoxication or other medical condition, eg, complex partial seizures) (American Psychiatric Association, 2013)1.

Criterion B refers to the inability of one or more alters to remember things that one or more other alters have experienced. This specific type of dissociative amnesia is most commonly associated with amnesia for every day events in which an alter other than the current alter was present. This is what leads to some dissociative individuals finding evidence of their time loss in the form of clothing or other items that they apparently own but don’t recognize, journal entries or sticky notes in their handwriting that they don’t remember writing, or insistent strangers calling them a name that isn’t theirs. This criterion can also be fulfilled by alters being unable to recall pertinent personal information such as the body’s age, current residence, or spouse. However, this criterion is generally not considered fulfilled just because the host or other alters are unable to recall trauma that spanned for years of their childhood and created their DID. That alone would not point to inter-identity amnesia and so would result in a diagnosis of other specified dissociative disorder subtype 1. This criterion cannot be fulfilled by incidents that can be explained by ordinary forgetting.

Criterion D excludes presentations that mimic DID due to culture or religion (such as a spiritual leader acting as a medium as part of cultural ceremonies) or due to imaginary play. 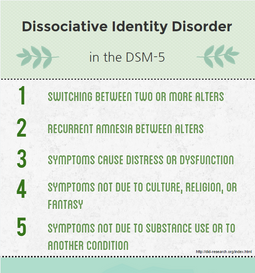