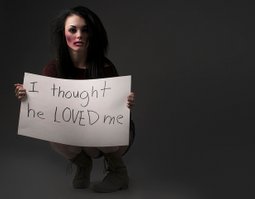 Image: "I Thought He Loved Me" by dualdflipflop

Trauma bonding refers to an attachment that a victim of abuse, neglect, or other chronic interpersonal trauma can have towards the perpetrator (Pace UK, n.d.; Raghavan & Doychak, 2014)1,2. It can be found in victims of everything from domestic violence to child abuse, hostage situations to religious cults, and prisoners of war to human trafficking (Jülich, 2005)3. It’s often the result of cycles of abuse (Center for Counseling & Victims' Services, n.d.)4 or of active manipulation (Raghavan & Doychak, 2014)2. In general, more extreme bonds tend to be the result of more extreme alternations between positive and negative treatment (Dutton & Painter, 1993)5. Trauma bonding almost always involves a real or perceived threat of danger; harsh treatment or abuse interspersed with “honeymoon” periods or even the smallest and most basic acts of kindness; isolation from other perspectives or anyone who could help the victim; and a belief that there’s no way to escape or that escape wouldn’t improve the victim’s situation (Pace UK, n.d.; Jülich, 2005)1,3.

It should be noted that to a victim of interpersonal trauma, even the absence of violence can be interpreted as kindness. Many victims feel a sense of relief or gratitude simply because the abuse wasn't "worse." As well, it's important to keep in mind that isolation isn't always due to a physical barrier or even to active manipulations by the abuser. Victims can be isolated by threats that prevent them from talking to others about the abuse, but they can also be isolated by a sense that no one will believe them if they do talk, by the obvious decision of others to not acknowledge that anything is wrong, and by feelings of shame or guilt (Jülich, 2005)3. A perceived inability to escape may be based on factors such as threats of violent retaliation, economic dependence (Dutton & Painter, 1993)5, or an inability of dependent victims, such as children, to convince outside individuals in positions of authority of their need to be removed from the care of their abuser (Jülich, 2005)3.

Similarly, despite the association between trauma bonding and threats of physical violence, this is not always the case for child victims. Many are willing to do or withstand anything to avoid emotional or verbal abuse from a loved one, and they're often terrified of sending someone to jail, of their family being split up, of being taken away from their family, or of losing a parent's love. In the short term, even the threat of having a favorite toy destroyed can be sufficient to bond them to their abuser and ensure their silence. In cases of childhood sexual abuse, the child may believe that the abuser genuinely loves them or that the abuse is a good thing or means that they're special, and they may be confused by physical sensations of pleasure that result from the abuse (Jülich, 2005)3.

Trauma bonding is in many ways the result of a survival instinct that urges the victim to submit to their abusers in order to avoid being hurt. Active identification with an abuser is a way for the victim to predict the abuser's reactions, to discourage the abuser from enacting violence against the victim, and to encourage the abuser to provide nurturance and care that the victim, due to their isolation, cannot obtain elsewhere (Jülich, 2005)3. However, for many adults especially, being taken in by false promises, genuine positive regard for the abuser or for the person that the victim wants to believe that the abuser is, or a sense of familiarity when adult victimization echoes childhood victimization can also play a role (Dutton & Painter, 1993; Raghavan & Doychak, 2014)2,5. For many child victims, trauma bonding may occur because the abuser is a caretaker that the child relies on for survival. In some cases, trauma bonding may also be associated with a need to please an abuser in order to protect other potential victims (Jülich, 2005)3.

Trauma bonding is often labeled “Stockholm Syndrome” (Pace UK, n.d.)1, but that’s a bit of a biased and misleading label. Most people associate Stockholm Syndrome with kidnapping or hostage situations, not with child abuse or domestic violence. The term also drastically oversimplifies the concept and its causes. Trauma bonding can include a wide range of emotions and responses and is more than just someone feeling like they love an abuser. It often involves negative perceptions of oneself, particularly regarding traits that the perpetrator has expressed a negative perception towards (Dutton & Painter, 1993; Raghavan & Doychak, 2014)2,5. It also tends to involve a sense of powerlessness and a perception of the perpetrator as powerful in a way that requires the victim to rely on them for protection and survival (Center for Counseling & Victims' Services, n.d.; Dutton & Painter, 1993)4,5. This is reflected in how C-PTSD describes individuals’ distorted perceptions of their abusers. While some may outright profess love for those who hurt them, others may become preoccupied with getting revenge or attribute to their abuser an unrealistic or impossible degree of power and control (Complex PTSD, 2013)6.

Trauma bonding can be an important part of what causes a victim of abuse to feel loyal to their abuser, to remain with their abuser, or even to actively defend their abuser, in some cases going so far as to risk legal prosecution alongside or in place of their abuser (Raghavan & Doychak, 2014)2 or to retract previous allegations of abuse (Jülich, 2005)3. The victim may come to believe that the abuse is normal, isn’t “that bad,” or is their fault, and they may be unable to view the situation otherwise (Raghavan & Doychak, 2014)2. If they do recognize that something is wrong, they may try to insist that all abusive incidences were isolated and won’t happen again, that the abuser has changed, or that the abuser will change. If the victim does get free, they may find themself longing to return to their abuser or be unable to free themself from all of the negative lessons that they learned during the relationship (Dutton & Painter, 1993)5. Trauma bonding carries with it a real risk of victims refusing to get outside help, actively rejecting help from concerned third parties, trying to return to an abuser after contact is broken, or trying to avoid doing anything that might hurt the abuser or their reputation even after contact has been broken for good (Pace UK, n.d.)1. It can be difficult for outsiders to understand the reactions of victims who struggle with trauma bonding, but any judgments that they cast might only contribute to further harm to survivors (Jülich, 2005)3.

Traumatic bonding is also associated with learned helplessness, a belief that one’s actions cannot lead to positive change and so a reduced desire or ability to try to improve one’s situation (Center for Counseling & Victims' Services, n.d.)4. It can cause a victim to completely lose their sense of self and system of meaning and to instead adopt their abuser’s view of the world (Raghavan & Doychak, 2014)2. For child victims, it may be associated with fears of loneliness, emptiness, rejection, or abandonment because the child had no stable sense of self before the abuse began and so came to view the abuse and identification with their abuser as an integral part of their identity. As an adult, this can lead to co-dependency, regression, or feelings of inferiority. Interestingly, many victims who struggle with traumatic bonding will still take steps to report their abuser if they feel that others are at risk of being harmed. Unfortunately, many victims will blame themselves if they realize that they may have been able to prevent others from being harmed if they had spoken out about their own abuse (Jülich, 2005)3.

These dynamics are further complicated in the context of sex trafficking. For example, more overt physical violence may be to some extent replaced by dehumanization, humiliation, vague and unpredictable threats, surveillance, intimidation, and manipulations of feelings of love and financial dependency. The role of sex both between the victim and their trafficker and the victim and clients in the context of coercion and reduced agency can serve to further entrap the victim. The victim may have children with the trafficker, may owe the trafficker a large debt, may rely on their trafficker not to threaten their citizenship status, or may fear their situation being revealed to unsupportive family and friends. All of these factors may be combined with those usually faced by abused intimate partners due to traffickers attempting to hide the power imbalance behind pretenses of a romantic relationship. Further complications arise when traffickers deliberately play victims against each other, encouraging competition, abuse, and exploitation among those under their power while simultaneously leaving other victims as the only support system that a victim has. Fluctuating power levels within groups of victims may also mean that current "favorites" are expected to help emotionally break newer victims, adding forced perpetration to the factors that a victim must try to overcome and further damaging their ability to maintain their own sense of morals and so their own sense of self and autonomy (Raghavan & Doychak, 2014)2. This can be complicated even more when the victims are minors, introducing many of the aspects unique to children who are vulnerable to traumatic bonding as well.

1 Pace UK. (n.d.). What is trauma bonding? Retrieved from http://paceuk.info/about-cse/what-is-trauma-bonding/

2 Raghavan, C. & Doychak, K. (2014). Trauma-coerced bonding and victims of sex trafficking: Where do we go from here? International Journal of Emergency Mental Health and Human Resilience, 17(2), 583-587.

For years, many of my alters were intensely loyal to one of my main abusers. They tried to defend her to others, wanted to convince me that she'd done nothing wrong, and even contacted her behind my back. Now that we've started processing more of what she did to us, one of my alters admitted that the abuser deliberately manipulated us to identify and sympathize with her. If we were able to do so, we were hurt less than other children who she didn't give that chance. If we seemed not to be falling into line, she could be extremely cruel to both us and the others. It makes me feel sick to think about.