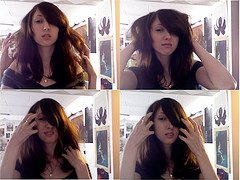 It is uncommon for those with dissociative identity disorder (DID) to have comorbid narcissistic personality disorder (NPD). However, it is possible for an abuser of an individual with DID to be a malignant narcissist, and some alters, especially introjects or persecutors, may identify and present as if they have NPD.

The DSM-5 gives the following criteria for a diagnosis of narcissistic personality disorder:

A pervasive pattern of grandiosity (in fantasy or behavior), need for admiration, and lack of empathy, beginning by early adulthood and present in a variety of contexts, as indicated by five (or more) of the following:

1. Has a grandiose sense of self-importance (e.g., exaggerates achievements and talents, expects to be recognized as superior without commensurate achievements).

2. Is preoccupied with fantasies of unlimited success, power, brilliance, beauty, or ideal love.

3. Believes that he or she is “special” and unique and can only be understood by, or should associate with, other special or high-status people (or institutions).

5. Has a sense of entitlement (i.e., unreasonable expectations of especially favorable treatment or automatic compliance with his or her expectations).

6. Is interpersonally exploitative (i.e., takes advantage of others to achieve his or her own ends).

7. Lacks empathy: is unwilling to recognize or identify with the feelings and needs of others.

8. Is often envious of others or believes that others are envious of him or her.

Criterion 1 refers to routinely overestimating one's abilities and inflating one's accomplishments, appearing boastful and pretentious, and expecting exuberant praise that one feels matches one's due. This is often paired with devaluing others' contributions to one's success.

Criterion 2 refers to feeling like one is owed success, power, admiration, and privilege. An individual with narcissistic personality disorder might compare themself to famous or privileged people due to their intellect, beauty, or other highly desirable traits. Some individuals with NPD may even express belief that they are favored by God above all others.

Criterion 3 refers to expecting others to recognize that one is superior, special, or unique and to treat one accordingly. Individuals with NPD may only associate with others to whom these characteristics apply or may label their current acquaintances in such a way, and doing so boosts their own self esteem by allowing them to mirror the labels assigned to their associates to themself. They may insist on being served only by the best professionals but devalue those who don't deliver what they want. They place their own needs above those of others and believe that this is only natural and right.

Criterion 4 refers to having an excessively fragile and easily wounded self esteem and so being preoccupied with how well one is doing and how one is regarded by others. This may manifest as a need for constant attention and admiration by others. They may expect others to be delighted upon their arrival, to want all of their possessions, and to lavish them with compliments.

Criterion 5 refers to the expectation that one should be catered to and a reaction of confusion or fury when this does not occur. An individual with NPD may assume that normal rules and social norms do not apply to them and become angry when others do not automatically want to assist them in everything that they do.

Criterion 6 refers to an expectation to be given anything that one wants or needs even if what one wants would be harmful to others or very difficult to obtain. An individual with NPD may expect dedication and devotion from everyone and may demand many intense things from them. They may form relationships with the expectation of somehow benefitting or because the other person enhances their self esteem. They may take things that they feel should naturally belong to them without consideration to others.

Criterion 7 refers to difficulty or unwillingness regarding recognizing or respecting the needs, feelings, and subjective experiences of others. Individuals with NPD may assume that others are as absorbed with the individual's welfare as they are without caring about the welfare of others. They may discuss their own needs and problems at length without caring about others' needs or problems or even acknowledging that others have such. If others do talk about their own problems or concerns, individuals with NPD will often become impatient with them or belittle them. They may make harmful remarks without seeming to notice the comments' harmful nature or may seem to take pleasure in the harm caused. They may view others' feelings, needs, or desires as weaknesses or vulnerabilities. They can be emotionally cold and distant.

Criterion 8 refers to envying others' positions, status, wealth, positions, relationships, or successes and believing that one better deserves such things. When discussing one's own successes, an individual with NPD may refuse to acknowledge others' contributions, especially if those others involved were acknowledged or praised for their contributions. They may expect everyone that they come across to envy everything about them, even if the characteristic that they are attempting to have acknowledged is not one that would be appropriate for the other individual in question to envy or acknowledge.

Criterion 9 refers to putting down or belittling others, even those who are in a higher position, have a higher status, or are trained or an expert in the thing that one is not but is criticizing.

Contrary to what one might think, individuals with narcissistic personality disorder have very low self esteem and are very vulnerable to any sort of criticism. Perceived put-downs may leave them feeling humiliated, degraded, hollow, or empty, and they may react with disdain, rage, or a snide counterattack. They may attempt to mask and protect their esteem by withdrawing socially or assuming humility. Various degrees of depression can also indicate feelings of shame or humiliation in individuals with NPD. Relationships are often impaired because individuals with NPD feel entitled to so much, require constant admiration and praise, and are not emotionally sympathetic, caring, or sensitive towards others. Ambition and confidence may lead to success, but intolerance of criticism or failure may lead to inability to take risk or engage in any sort of competitive process. Sustained periods of success may cause hypomanic moods. NPD is associated with anorexia nervosa, substance use disorders, and other personality disorders (American Psychiatric Association).1

It's estimated that NPD ranges from almost non-existent within community samples to affecting 6.2% of the population. It may be more prevalent within younger individuals. It may be equally common in males and females or affect males 75% of the time. Care must be taken to differentiate narcissistic personality disorder from other personality disorders, from mania or hypomania, and from substance use disorders (American Psychiatric Association).1