Time loss is defined as a period of time that one or more alters cannot account for due to another alter having been active in the body or mind in their place. Time loss can span from a few seconds to a few years but may not be complete. For example, if Alter A is the host from ages 7-9 and Alter B is not present at all during this time period, Alter B may have no idea of anything that occurred during this period when they become active again at age 10. On the other hand, once Alter B has awakened, they may be able to access Alter A's or another alter's memories in order to get some idea of what transpired in their absence. It is also possible that while they were not active from ages 7-9, Alter B may have gotten flashes of information about the outside world within this time period. Dissociative barriers between alters are not tangible, literal things, and more information can bleed through them than some might expect.

A specific form of time loss occurs when an alter is blacked out. A black out is when one or more alters are unaware of anything while one or more other alters use the body. Some alters may have a vague sense of time passing or feel as if they're trapped in darkness, but many may experience a complete episode of time loss in which they do not exist. Time loss in the form of black outs can be frightening for many to notice. Often, black outs are perceived as overwhelming evidence that one has either dissociative identity disorder (DID) or some non-traumagenic but likely neurological problem. Black outs can feel confrontational and may induce episodes of denial in which the individual or alter cannot accept that they have DID, were abused, or are anything other than a liar, fake, or lunatic.

Black outs are associated with dissociative amnesia. Like individuals who suffer from dissociative amnesia, alters who have blacked out may not recognize or acknowledge that they have lost time and may become aggressive or distressed if confronted with evidence of blanks in their memory. Amnesia can cover amnesia, leaving an individual convinced that they never lose time up until the moment in which it becomes undeniable. Evidence of time loss can include finding possessions, art, or writings that the individual does not recognize, being called an unknown name by strangers who act in a familiar manner towards them, or being confronted about their supposed actions that they cannot remember. Sometimes, an alter might experience dissociative fugue and suddenly find themself in a different location with no explanation of how they got there. There might be periods of their life that they can’t recall. Their entire childhood might be blank, or they might suddenly realize that they cannot remember anything before they left their house at age 18.

Not all switches lead to time loss. Many systems have developed some degree of co-consciousness, or the ability for two or more alters to remain present in the body or aware of the outside world at once. Alters that are co-conscious, or co-con, with each other might have varying degrees of control over the body and may or may not be aware of each others' thoughts and feelings to varying degrees. Some systems are naturally more co-con than others. Some may need to work for years to achieve a working state of co-consciousness between a few highly communicative alters while others may find that they can so easily become co-conscious that they have a hard time not going into denial that they ever lose time at all. 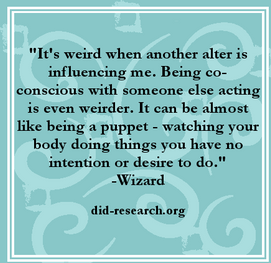 "It's weird when another alter is influencing me. Sometimes I get enough of a sense of them to realise who it is but very often I think it's just me thinking or feeling something. Then later I'll look back at things I wrote or did at the time and it's so obvious to me that those things didn't come from me at all! Being co-conscious with someone else acting though is even weirder. It can be almost like being a puppet - watching your body doing things you have no intention or desire to do. Sometimes it's scary but other times it feels sort of dream-like and later it's hard to remember what happened. 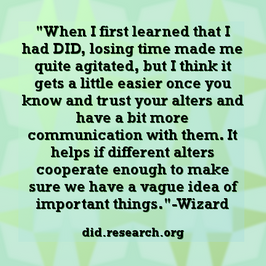 I've never been able to remember my childhood but I didn't have the ability to think about the fact or why it was like that or whether it was normal. Now I know that in its self was part of the dissociation as much as the memory loss was. When I first learned that I had DID, losing time made me quite agitated, but I think it gets a little easier once you know and trust your alters and have a bit more communication with them. You have to get good at bluffing your way through things when vital information is missing, but it helps if different alters cooperate enough to make sure we have a vague idea of important things like where items have been left or whether we have taken our medications yet that day."

“The odd sensation I had while cooking would often last through the meal, then dissolve as I climbed the stairs. I would enter my room and discover the homework books I had left on the bed had disappeared into my backpack. I’d look inside my books and be shocked to find that the homework had been done. Sometimes it had been done well, at others it was slapdash, the writing careless, my own handwriting but scrawled across the page.

As I read the work through, I would get the creepy feeling that someone was watching me. I would turn quickly, trying to catch them out, but the door would be closed. There was never anyone there. Just me. My throat would turn dry. My shoulders would feel numb. The tic in my neck would start dancing as if an insect was burrowing beneath the surface of the skin. The symptoms would intensify into migraines that lasted for days and did not respond to treatment or drugs. The attack would come like a sudden storm, blow itself out of its own accord or unexpectedly vanish.

Objects repeatedly went missing: a favourite pen, a cassette, money. They usually turned up, although once the money had gone it had gone for ever and I would find in the chest of drawers a T-shirt I didn’t remember buying, a Depeche Mode cassette I didn’t like, a box of sketching pencils, some Lego.”