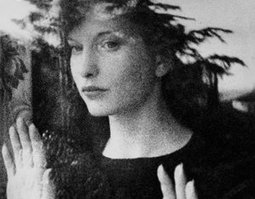 Criterion A clarifies that depersonalization/derealization disorder involves feelings of depersonalization (such as that one isn't real or isn't connected to or in control of one's thoughts, feelings, sensations, body, or actions; this may involve alterations in how one perceives reality, how one experiences time, how one conceptualizes their self, or how one experiences emotions or physical sensations) and/or feelings of derealization (such as that the world around one isn't real or relevant to them; this may involve the world seeming unreal, dreamlike, foggy, lifeless, or distorted).

Onset can be sudden or gradual, and episodes can last from hours to years. Stress or environmental factors can trigger episodes or exacerbate symptoms. Though childhood trauma is associated with depersonalization/derealization disorder, this connection is not as strong as it is for other dissociative disorders. The disorder is often associated with severe stress, depression, anxiety, and substance abuse (American Psychiatric Association, 2013)1. There is also evidence that meditation can trigger depersonalization or derealization in some individuals (Lustyk, Chawla, Nolan, & Marlatt, 2009).2 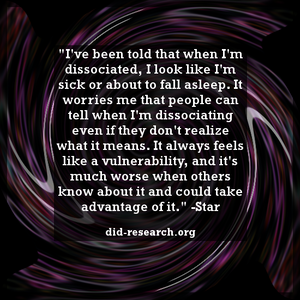 Image transcript: Text in front of a whirled background. The text reads: "I've been told that when I'm dissociated, I look like I'm sick or about to fall asleep. It worries me that people can tell when I'm dissociating even if they don't realize what it means. It always feels like a vulnerability, and it's much worse when others know about it and could take advantage of it." The text is attributed to Star.