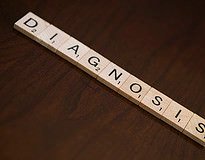 Dissociative identity disorder (DID) can be diagnosed using clinical observation, the Multidimensional Inventory of Dissociation, the Dissociative Disorders Interview Schedule, or the Structured Clinical Interview for Dissociative Disorders, the last of which is considered the "gold-star" for diagnosis. The Dissociative Experiences Scale is a screening tool for dissociative disorders but should not be used to diagnose. Self diagnosis is not advised because DID can easily be confused with similar conditions, especially borderline personality disorder. Those who are not professionals may not have the information necessary to make an accurate diagnosis, and even professionals are biased when it comes to themselves.

The dissociative experiences scale is a questionnaire that has 28 questions about how frequently (ranging from 0-100% by intervals of 10%) different dissociative symptoms are experienced during daily life. Experiences under the influence of alcohol or drugs do not count. This scale is a screening tool and is not meant to be used to diagnose. Instead, it can be used to indicate that someone might have a dissociative disorder so that more thorough investigation can be undergone. It can be found online here. The DES has been used in hundreds of studies on dissociation. In 1996, a meta-analysis of existing studies showed that the DES has excellent reliability but only decent discriminate validity (Van Ijzendoorn & Schuengel, 1996)1.

The Multidimensional Inventory of Dissociation is a self-administered multiscale instrument that contains 218 items, 168 of which are for dissociation and 50 of which are for validity. It assesses 14 major facets of pathological dissociation and uses 23 scales to diagnose dissociative disorders. Its items measure the frequency of experiences ranging from 0 (never) to 10 (always) when not under the influence of drugs or alcohol, and no timeframe is given in order to prevent rare occurrences such as amnesia from being missed. The MID's understanding of dissociative identity disorder is partially based off of Paul F. Dell's findings about less publicized aspects of the disorder, and it can distinguish adults with DID from adults with OSDD and nonclinical adults. It is especially useful for clinical research and for individuals who present with a mixture of dissociative, posttraumatic, and borderline symptoms. The MID has good internal reliability, temporal stability, convergent validity, discriminant validity, and construct validity (Dell, 2006).2 Professionals can access the MID and request acccess to scoring materials here. Newer materials are maintained and updated by Coy and Madere.

The Dissociative Disorders Interview Schedule can be used by trained professionals to diagnose dissociative disorders (excluding depersonalization/derealization disorder), somatization disorders, major depressive disorder, and borderline personality disorder. Additional items provide information about substance abuse, childhood physical and sexual abuse, and secondary features of dissociative identity disorder. It contains 16 sections with 131 questions and takes 30-45 minutes to administer. It is highly structured in order to control for iatrogenic aspects. Questions are ordered so as to avoid the individual answering in ways such as to obtain a false diagnosis of DID. Criteria for DID were based off of criteria for MPD from the DSM-III-R due to when the instrument was published. It was the first diagnostic instrument that measured dissociation. At the time, it was found to have excellent validity, inter-rater reliability, specificity, and sensitivity (Ross et al., 1989).3 A newer version reflects DSM-5 criteria; it is available online but should not be used in the absence of a trained professional who can fully evaluate the individual's symptoms and history.

Evaluation with this instrument can take 3-5 hours. It assesses five dimensions: dissociative amnesia (the inability to recall personal information); depersonalization (feeling detached from oneself or one's surroundings); derealization (feeling as if the world isn't real); identity confusion (having trouble connecting with one's identity); and identity alteration (the sense of acting like or being another person). The semi-structured instrument is designed to avoid leading questions, but many who are interviewed using it spontaneously volunteer a history of trauma, something associated with many dissociative conditions. The SCID-D has been shown to have good-to-excellent reliability and discriminate validity for dissociative symptoms and dissociative disorders (Hall & Steinberg, 1994).5

The DES has alternate translations in French, Spanish, Portuguese, German, Dutch, Finnish, Swedish, Chinese, Turkish, and Hebrew that are comparable to the English DES.

The MID has an alternate translation in Hebrew that has been validated. Other translations that have not been individually validated include Spanish, Italian, French, German, Finnish, Norwegian, and Chinese.

The DDIS has alternate translations in Spanish, Portuguese, Chinese, and Turkish.

The SCID-D has alternate translations in German, Dutch, and Turkish.

It took me over seven years to get diagnosed. A decade ago, my first psychiatrist didn't believe me, so she diagnosed me with a psychotic disorder NOS. Only after getting hospitalised years later did I finally get the right diagnosis. Unfortunately, this seems to be the norm rather than the exception.