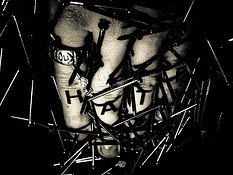 It is uncommon for those with dissociative identity disorder (DID) to have comorbid antisocial personality disorder (ASPD). However, it is possible for an abuser of an individual with DID to have ASPD, and it is common for alters, especially introjects or persecutors, to identify and present as if they have ASPD.

The DSM-5 gives the following criteria for a diagnosis of antisocial personality disorder:

A. A pervasive pattern of disregard for and violation of the rights of others, occurring since age 15 years, as indicated by three (or more) of the following:

1. Failure to conform to social norms with respect to lawful behaviors, as indicated by repeatedly performing acts that are grounds for arrest.

2. Deceitfulness, as indicated by repeated lying, use of aliases, or conning others for personal profit or pleasure.

3. Impulsivity or failure to plan ahead.

4. Irritability and aggressiveness, as indicated by repeated physical fights or assaults.

5. Reckless disregard for safety of self or others.

7. Lack of remorse, as indicated by being indifferent to or rationalizing having hurt, mistreated, or stolen from another.

B. The individual is at least age 18 years.

C. There is evidence of conduct disorder with onset before age 15 years.

D. The occurrence of antisocial behavior is not exclusively during the course of schizophrenia or bipolar disorder (American Psychiatric Association, 2013).1

Criterion A specifies antisocial patterns of behavior that can combine to allow for a diagnosis of antisocial personality disorder. These include breaking the law (whether caught and arrested or not), lying to manipulate or deceive others for personal gain, impulsive or short-sighted behaviors, physically harming others out of anger, putting oneself or others in danger, irresponsibility and a failure to honor obligations, and a lack of remorse regarding harmful behaviors. Because deceit is a possible core feature, a diagnosis may require obtaining information about the individual from outside sources.

Criterion B specifies that ASPD cannot be diagnosed in minors.

Criterion C clarifies that in order for a diagnosis of ASPD to be made, antisocial traits must have been present before age 15. Though APSD cannot be diagnosed before age 18, it can manifest as conduct disorder, as "a repetitive and persistent pattern of behavior in which the basic rights of others or major age-appropriate societal norms or rules are violated." This involves "aggression to people and animals, destruction of property, deceitfulness or theft, or serious violation of rules."

Criterion D states that ASPD cannot be diagnosed for symptoms that are due to schizophrenia or bipolar disorder.

Antisocial personality disorder is associated with a lack of empathy and so with callous and cynical behaviors. However, individuals with ASPD are often glib, superficially charming, and verbally skilled. Arrogance is common, and many individuals with ASPD have comorbid narcissistic, histrionic, or borderline personality disorder. Comorbid anxiety disorders, depressive disorders, substance use disorders, somatic symptom disorder, gambling disorder, and other disorders of impulse control are also common (American Psychiatric Association, 2013).1

Individuals with ASPD are likely to have many sexual partners whom they exploit. If an individual with ASPD has a child, they are likely to be irresponsible and neglectful and can be abusive. They may fail to support themselves through legal means and are more likely than the general population to die from violent means. Individuals with ASPD often complain of "tension, an inability to tolerate boredom, and depressed mood." ASPD may be made more likely by "child abuse or neglect, unstable or erratic parenting, or inconsistent parental discipline" (American Psychiatric Association, 2013).1

The prevalence of ASPD is between 0.2 and 3.3%. ASPD is most common among males with substance abuse problems or in prisons. ASPD is more common in those living in poverty and immigrants, though some worry that seemingly antisocial behaviors in these settings may be done out of necessity for survival. It is known to become less severe with age, especially in regards to criminal behavior. There is a biological risk associated with having relatives, especially female relatives, with ASPD, though there is also a risk associated with being adopted into a family where members have antisocial personality disorder. A genetic predisposition is also associated with somatic symptom disorder and substance abuse disorders. ASPD is more common in males than females, though some believe that the focus on aggression leads to females being under-diagnosed (American Psychiatric Association, 2013).1

Antisocial personality disorder is also known as sociopathy, psychopathy, and dyssocial personality disorder (American Psychiatric Association, 2013).1 However, some use psychopathy or sociopathy to refer to a distinct subgroup of individuals with a certain clinical presentation of ASPD. Some use the terms psychopathy and sociopathy interchangeably. Others use psychopathy to describe a presentation that is due more to a genetic predisposition and neurological abnormalities and is associated with difficulty forming relationships that aren't shallow or intended for manipulation, viewing others as pawns or objects to be manipulated and used, and a complete lack of remorse. According to these individuals, psychopaths are charming, glib, and seemingly high functioning. Psychopaths that are engaged in criminal behaviors tend to try to minimize the risks of negative consequences to themselves. In contrast, these individuals use the term sociopathy to describe a presentation that is due to aversive childhood experiences and environment and is associated with impulsive and erratic behaviors, general difficulties with forming attachment but the capability to attach to certain people or groups, and an inability to present as normal or to function. Sociopaths are more likely to have poor emotional regulation and engage in violent outbursts (Grohol, 2015).2 Other researchers use the same method of distinguishing between populations of individuals with severe ASPD but refer to the first group as primary psychopaths and to the second as secondary psychopaths.

Secondary psychopathy is associated with neurotic anxiety while primary psychopathy is associated with fearlessness, poor punishment-based behavioral inhibition, weak electrodermal anticipation of punishment, and average levels of positive and negative emotionality (Newman, MacCoon, Vaughn, & Sadeh, 2005)3 or extreme shallow affect. These deficits are thought to be associated with damage to the orbital and medial prefrontal cortex (OMPFC) and amygdala. It should be noted that primary psychopaths, though lacking affective empathy, have the cognitive empathy skills necessary to predict, though not fully understand or share, others' emotional reactions. Psychopathy is a useful diagnostic category separate from ASPD because ASPD describes the majority of criminals while psychopathy involves more extreme and less common behavioral and cognitive markers. Psychopathy is screened for using the revised Psychopathy Checklist that looks for Factor 1 items such as "superficial charm, pathological lying, lack of empathy, and shallow affect" and Factor 2 items such as "parasitic lifestyle, proneness to boredom, and impulsivity" (Honk & Schutter, 2006).4

2 Grohol, J. M. (2015, February 12). Differences between a psychopath vs sociopath. Retrieved from http://psychcentral.com/blog/archives/2015/02/12/differences-between-a-psychopath-vs-sociopath/