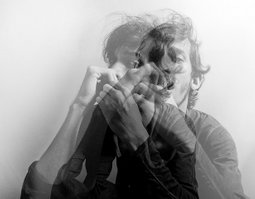 Switching refers to one alter taking control of the body, being given control by another alter, or gaining prominence over another alter. Although perhaps the most well-known feature of dissociative identity disorder (DID), switching occurs less often than passive influence or other internal manifestations of dissociated parts. Additionally, switching can be more varied than many may be aware.

Switches can be consensual, forced, or triggered. If two alters choose to switch with one another, they usually have some degree of co-consciousness with each other and could both choose to remain at front, or actively aware of the outside world, after the switch. However, even with consensual switches, the alter who takes a step back, so to speak, may then retreat inside for whatever reason. A subtype of consensual switches are planned switches that were agreed upon ahead of time. For example, the host may ask a more academic alter to help them to take a standardized test on a certain date. On the other hand, a switch that is forced is not wanted by one of the alters involved. It may be that the alter that was at front has unexpectedly retreated, requiring another alter to quickly take control of the body in order to prevent injury, embarrassment, or other such problems or that the alter who is switching out is pushing past a weaker alter against their wishes. Finally, triggered switches are not desired by any of the alters involved and occur when a stimulus has been registered that forces out an alter who can better handle it. For example, if an alter was created to handle abuse from a specific perpetrator and the system then runs into that perpetrator at the store, that alter is likely to be shoved to front so that no other alters can be hurt.

It should be kept in mind that some systems use the term trigger to refer to both positive and negative stimuli that can catch an alter's attention. For example, ducks at the pond could be a trigger for a 7 year old alter to push their way to front, or someone calling who is a special friend for one alter in particular might trigger that alter to switch out. However, as some systems do only use the term trigger to refer to negative stimuli that causes a dissociative or posttraumatic reaction, care should be taken in using the term positively.

Switches can be slow, quick, or uncontrollably rapid. Slow switches are usually consensual switches in which two or more alters are co-conscious to varying degrees and slowly blending and retreating to allow one alter to gain prominence. Slow switches can also indicate that the system is heavily dissociated and depersonalized and that alters are struggling to connect with the mind and body. In contrast, quick switches can be consensual, planned, forced, or triggered. Triggered switches are especially likely to be quick, but too many triggers or too much overall stress can also lead to rapid cycling. Rapid cycling, sometimes called rolledexing or carousel-switching, is when multiple alters are shoved to front in quick succession. This can involve several alters fronting over the course of an hour or even within a few minutes! It can be highly disorienting for those involved and can interfere with memory formation, concentration, and remaining covert (that is, not appearing visibly mentally ill to others).

Some indicators that a switch may be about to occur include the following: feeling "spacey", depersonalized, or derealized; blurred vision; feeling distanced or slowed down; feeling an alter's presence; or feeling like time is beginning to jump (indicating minor episodes of time loss).

External signs that a switch may have just occurred include the following: heavy blinking as if the individual is just waking up; mild muscle spasms or jerks; disorientation or visible confusion; checking the clock or one's watch; seeming not to remember anything that just happened; complaining of a mild or moderate headache; adjusting clothing or posture; clearing one's throat before speaking so that the tone or pitch changes; or a change in vocabulary, syntax, preference, opinion, temperament, skills, or general personality.

Passive influence is more common than switching, and it is more covert and harder to notice. Even switching is rarely as blatant or extreme as the media commonly portrays. It is rarely accompanied by an alter changing what clothing the system is wearing, announcing themselves in public, or extreme whiplashes in behavior or personality. Although an individual's therapist or spouse may learn to recognize not only switches but specific alters, most others may rationalize away any switching that they notice as the individual with DID being abnormally tired, grumpy, or in a strange mood. Even close friends who have expressed previous interest in knowing which alter is out may find that the DID system tries to hide switches from them and that only a few alters that feel very comfortable around the friend are actually willing to make their presence known. Most systems will go to great lengths to hide their condition. Denying and downplaying symptoms as much as possible is common.

Both full switches and "partial intrusions" of alters are described in more detail by Dell in the paper "A New Model of Dissociative Identity Disorder". More information is provided through Dell's work on the Multidimensional Inventory of Dissociation (MID). 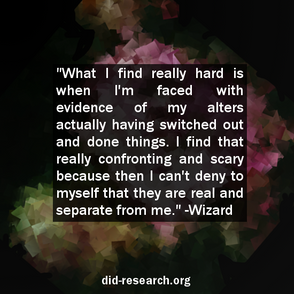 "I have one particular child alter who has a very good sense of humour, and part of his role is to help us experience enjoyment and lift our mood. He often comments on things I see or hear by putting a funny image in my mind about it to make me laugh. I'm usually ok with this sort of contact with my alters, even when what they are leaking through to me and making me have to experience is painful things like flashbacks or difficult emotions, although some of them think and feel in ways that conflict with my personal morals which can be difficult to accept. What I find really hard though is when I'm faced with evidence of them actually having switched out and done things. I find that really confronting and scary because then I can't deny to myself that they are real and separate from me."

"People unfamiliar with Dissociative Identity Disorder may envision the walls between alters and their memories as being concrete, but it is not that simple. Sometimes there is clear separation and total amnesia, but other times the lines can become so blurred that it is hard to tell who is who. That is the case with our system and the walls between me as the host and our core - I remember many of her memories crystal clearly and it can be hard to tell if they are mine or if they are hers. It can leave someone very unsure of their identity and wondering who they truly are."