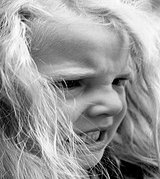 Criterion B lists social and emotional disturbances, of which a combination of two can meet the criteria for reactive attachment disorder. These disturbances involve: minimal social and emotional responsiveness to others; limited positive affect (thoughts, feelings,  emotions); episodes of unexplained irritability, sadness, or fearfulness that are visible when the child is having what should be a healthy interaction with an adult caregiver.

Criterion D states that the emotional withdrawal is caused by the insufficient care. The child's symptoms are not due to another condition or disorder and began in reaction to the lack of care.

Criterion E excludes those with autism spectrum disorder from being diagnosed with RAD because autism can cause similar attachment disturbances.

The most important aspect of RAD is the absent or severely underdeveloped attachment between the child and their caregiver due to the limited opportunities to develop and strengthen appropriate attachment. Because of this, children with RAD will not seek comfort from adults nor respond to comfort offered. They have comprised emotional regulation abilities and respond negatively to interactions with adults. RAD, like neglect in general, is associated with broad developmental delays, especially in cognition and language. Other associated features include repeated or ritualistic movements, postures, or utterances (stereotypies). Depressive symptoms are also possible (American Psychiatric Association, 2013)1.

Other signs of RAD may include a lack of a preferred attachment figure, social withdrawal, hypervigilance, and a tendency to react with aggression when exposed to sadness or distress. RAD has been shown to be associated with emotional problems, conduct problems, difficulty socializing with peers, hyperactivity, and fewer prosocial behaviors. A negative self concept is common, as are distrust towards others and the child attempting to mask negative emotions (Zimmermann & Iwanski, 2018)2.

RAD is found in approximately 10% of severely neglected children who are placed into foster care or institutions. The prevalence of RAD outside of these settings is unknown because neglected children are unlikely to be brought into an environment in which they could be diagnosed without child protective services first becoming involved. The diagnosis is usually made in younger children (American Psychiatric Association, 2013)1, although similar symptoms can be observed in older children as well. A lack of placement with supportive caregivers may prolong the disorder and worsen prognosis (Zimmermann & Iwanski, 2018)2.

A wide variety of outcomes is possible for children who have RAD. Some, especially those who are placed in the care of a well trained caregiver, will develop normal attachment and emotional regulation abilities. However, there are anecdotal reports that adults who had untreated RAD as children are likely to have a personality disorder, depressive disorder, anxiety disorder, or dissociative disorder. Difficulties forming and maintaining relationships might be the most prominent feature (Peterson, 2016)3.