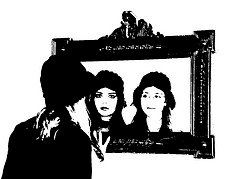 Cores, or originals, are the part of the self that existed before individuals with dissociative identity disorder (DID) developed other alters. Sometimes, cores will be the only part that is the same age as the body, claims the body’s name, and identifies with the body’s appearance, but hosts may often present in the same or a similar manner. Some cores may not be the same age as the body at all but may have frozen in time after a certain point, leaving their alters to handle their life for them while they retreated inside. Some cores may have more power and sway over their system than any of their alters while other cores may be nothing more than a part who just happened to solidify first. Some cores may be highly protected and shielded by their alters while other cores may be or work with the system’s host. The core may or may not be aware that trauma happened, but they’re unlikely to be emotionally connected and may struggle to accept what the trauma means for them. They may feel that what happened to their alters has nothing to do with their own history and self narrative.

Not all systems have any original parts. In cases in which there is no core, it’s likely that trauma began at such a young age that the child never got a chance to integrate in any significantly centralized way before they were required to form different self states to handle different aspects of their life. Often, those with no cores are from a family in which disorganized attachment was the norm. As a child, they could never expect consistent care or safety, and they had to be ready to react in a wide variety of ways without much warning or without any mistakes being allowed for.

Other systems have multiple core shards. This is the result of either one core forming but later splitting in such a way that all the new alters identify as the original to an equal degree or of multiple alters forming around the same time and all acting as centralizing units of the system.

"I always thought I was the core, and I went through a real crisis when I discovered I wasn't. It's crazy because I don't think of anyone else in the system as being less important or less real, but realising that I was an alter not the core made me feel like I was less important and less real. I became convinced that I was nothing more than the role I had been created for and lost my identity for a while. Ever since then I've felt insecure because if I was created to take over from a previous host who is no longer active then I'm afraid one day that will happen to me too." 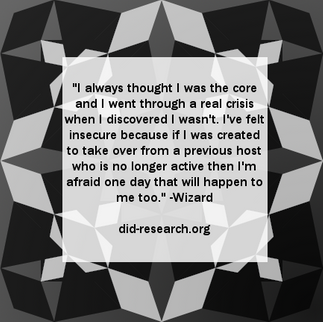