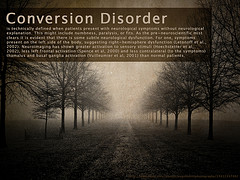 Image: "conversion disoder" by Will Lion

The DSM-5 gives the following criteria for a diagnosis of conversion disorder (functional neurological symptom disorder):

A. One or more symptoms of altered voluntary motor or sensory function.

B. Clinical findings provide evidence of incompatibility between the symptom and recognized neurological or medical conditions.

C. The symptom or deficit is not better explained by another medical or mental disorder.

D. The symptom or deficit causes clinically significant distress or impairment in social, occupational, or other important areas of functioning or warrants medical evaluation.

Coding note: The ICD-9-CM code for conversion disorder is 300.11, which is assigned regardless of the symptom type. The ICD-10-CM code depends on the symptom type (see below).

(F44.4) With weakness or paralysis

(F44.6) With anesthesia or sensory loss

Criterion A gives a basic descriptor of what category the possible symptoms fall under; that of altered voluntary motor or sensory function. What this includes is clarified under the specified symptom type. Examples of altered voluntary motor function include muscle weakness or paralysis, abnormal movements, abnormal walking style, and abnormal limb posturing. Examples of altered sensory function include "altered, absent, or reduced skin sensation, vision, or hearing." Conversion disorder can mimic seizures through psychogenic non-epileptic seizures (PNES) or can mimic a coma. It can cause "reduced or absent speech volume... altered articulation... a sensation of a lump in the throat...and [double vision]."

Criterion C specifies that if a symptom is due to another medical or mental disorder, it cannot be used to make a diagnosis of conversion disorder. It should be noted that it is possible for one to have a genuine neurological condition as well as conversion disorder that causes similar symptoms. For example, one could have both epileptic seizures and non-epileptic seizures.

Criterion D ensures that the symptom is sufficiently serious to warrant a diagnosis. It also ensures that symptoms that are due to cultural practices are not used for a diagnosis of conversion disorder.

Some features can support a diagnosis of conversion disorder. These include having experienced similar somatic symptoms in the past, onset associated with trauma, and associated dissociative symptoms. However, it should be noted that while trauma, especially childhood trauma, is associated with conversion disorder, it is not necessary for a diagnosis, and maladaptive coping is a possible factor as well (American Psychiatric Association, 2013).1