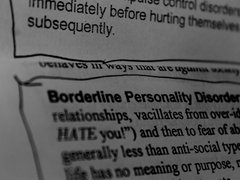 Criterion 5 refers to acts of self harm (cutting, burning, picking at scabs, picking at skin or hair, starvation, etc.) and suicidal threats, gestures, or attempts. 8-10% of individuals with borderline personality disorder successfully complete suicide attempts, and threats or unsuccessful attempts are very common. These threats or attempts are often responses to real or perceived rejection or to expectations of increased responsibility. Self harm may be used as a form of self punishment or to ward off dissociation.

Individuals with BPD often self sabotage, especially once a goal is directly in reach or has been acknowledged by others.  They may be more comfortable with animals or objects than with other people. They may struggle to retain a job, complete their education, or enter into and remain in a stable relationship or marriage (American Psychiatric Association, 2013).1