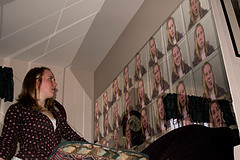 OSDD-1a is unique but difficult to diagnose because there is no clear boundary that determines if a part is associated with sufficient “discontinuities in sense of self and agency” to warrant a diagnosis of DID. A general rule of thumb is that if an individual has inter-identity amnesia, DID is diagnosed if there are two or more parts that each have an independent sense of self and self history. Indications that parts have an independent sense of self can include parts presenting with their own names, genders, sexualities, or other identity traits or parts having internal communication and relationships with each other. For individuals with OSDD-1a, dissociated parts are more likely to present as the same individual at different ages, as the same individual in different modes, or as different versions of the same individual. The individual may go by the same name regardless of which part is present, and each part may view itself as the main part. However, parts may still have different skills, emotional reactivity, or ways of interacting with the world. Additionally, because these parts lack full awareness of each other and each others’ activities, they may express themselves in highly contradictory ways. For example, someone with OSDD-1a may have a work self, a family self, a 5 year old self, and an angry self in addition to several parts that hold trauma memories. The work self may fully believe that work always needs to come first while the family self always prioritizes family, and these parts may become confused or agitated when others point out inconsistencies in their behavior or stated beliefs.

On the other side of the spectrum, it is the presence of at least two parts that contain more than just posttraumatic reactions, attachment needs, or emotions that differentiates OSDD-1a from borderline personality disorder (BPD), posttraumatic stress disorder (PTSD), and complex posttraumatic stress disorder (C-PTSD). Individuals with all of these disorders can experience dissociative amnesia when under extreme stress or when reminded of trauma. This can leave OSDD-1a in a murky grey area. The same individual might be diagnosed with DID, OSDD-1, or C-PTSD depending on which clinician diagnoses them and how they present at the time. However, individuals with OSDD-1 generally have at least one part that is more differentiated, separate, and autonomous than the most developed parts that naturally occur in BPD, PTSD, or C-PTSD. Individuals with these latter disorders may be very confused about who they are or sometimes feel out of control, but they never feel that different parts of them are capable of acting independently or that different parts of them have and express their own views or goals.

All of that said, OSDD-1a is not the only possible presentation of OSDD-1. Many individuals with OSDD-1 do not experience inter-identity amnesia but may have more developed parts. In some cases, OSDD-1 parts can be highly distinct and have strong independent senses of self. What separates these individuals from those with DID is that they do not black out or lose time. They may or may not have dissociative amnesia for aspects of their trauma history, and they may occasionally experience episodes of amnesia due to extreme stress or reminders of trauma. However, they do not experience memory disruptions between parts during their normal daily life. An individual with OSDD-1b has a subjectively continuous memory; different alters do not have different versions of their history for daily life because all relevant information is accessible to all alters.

Before the diagnosis of DID was expanded with the DSM-5, many individuals who would now fit the criteria for DID were instead diagnosed with DDNOS-1. In fact, many professionals believe that the majority of DDNOS cases were misdiagnosed DID cases! This is partly because it used to be required that a professional witness a switch between alters and identify a clear episode of time loss in order to diagnose someone with DID. Now, an individual can self-report having switched between alters, and more effort is made to identify cases in which individuals are amnesiac to their amnesia and are only aware of disremembered activities because of finding evidence of these activities or being told of them by others. However, many cases still slip between the cracks. The biggest remaining problem in differentiating between OSDD-1 and DID is that both are characterized more by passive influence and other partial dissociative intrusions than by overt switching between parts, but the latter is what the DSM-5 criteria for DID emphasizes. Accordingly, some researchers have made their own criteria.

In "Dissociation and the Dissociative Disorders," Dell describes three possible types of OSDD-1 based on the three symptom clusters of the MID. These symptom clusters are A) general dissociative symptoms, defined as memory problems, depersonalization, derealization, posttraumatic flashbacks, somatoform symptoms, or trance states; B) partial dissociative intrusions, which describes internal interactions or overlap between dissociative self states and which can manifest as passive influence, hearing alter voices, or self alteration; and C) full dissociative intrusions, which describes switching between dissociated parts of the self with associated amnesia. Individuals with DID are expected to meet criteria for all three symptom clusters while individuals with OSDD-1 may meet only two of the clusters. Of these, meeting criteria A and B is most common, leading Dell to conceptualize OSDD-1 as a form of partial DID or a Complex Dissociative Disorder in which individuals never experience complete switches between dissociated parts.

Counterintuitively, the higher levels of dissociation and the presence of multiple ANP associated with DID may lead many individuals with DID to at first present as higher functioning than many individuals with OSDD-1. This is because the ANP are dedicated to maintaining a "normal" life and are highly phobic of and avoidant towards the trauma-containing EP. The constant and severe dissociation of ANP helps them to achieve this. Individuals with OSDD-1b may have a harder time escaping from knowledge of their trauma and the internal reactions which this incites. Of course, their ability to work with their parts gives them an advantage in processing their trauma and healing. On the other hand, those with OSDD-1b may be plagued by doubt and shame regarding their "me-but-not-me" parts and the associated actions for which they have full knowledge but over which they feel they have no control. Additionally, individuals with OSDD-1a and individuals with OSDD-1b and less defined parts may have a harder time accepting that they have meaningful parts because they always feel like the same person, and they may struggle to establish internal communication and cooperation.

The article can be found here.