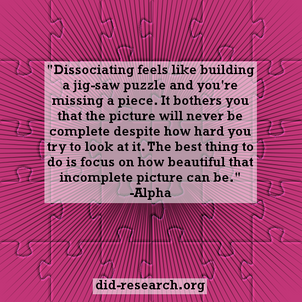 The author thanks each of the six individuals with DID who reached out to contribute their unique perspectives on life with dissociative identity disorder. The DID systems who contributed to this site each chose a unique monimer to protect themselves and their anonymity. If they chose to reveal additional information about themselves, this information is available below.

Rose represents a system of 9 that was diagnosed in 2012 and is getting a degree in clinical psychology and health science studies.

Selene is a system who was professionally diagnosed with DID in 2012. She’s busy with therapy, where she started EMDR. Besides therapy, she spends most of her time with her husband and children. It’s important for her to let herself and the world know that even if the odds are against someone with DID, they can be amazing partners and parents.

Star was officially diagnosed with DDNOS/OSDD in 2010 and with DID in 2013. Star is a young woman with over 50 alters, though only her host is usually present when not triggered to front. Only a few of Star's friends know about her condition, but Star does what she can to educate others about DID. If people knew only one thing about DID, Star wishes that they would realize that individuals with DID are just like anyone else, just a little more fragmented and likely struggling from PTSD.

Static Nonsense is the alias for a DID system of approximately 14 alters. They were officially diagnosed around the spring of 2014. They are currently in school for psychology and hope to specialize in trauma and dissociation so as to help advocate for those who are struggling with access to assessment, diagnosis, and treatment of dissociative disorders.

Image transcript: Text in front of puzzle pieces. The text reads: "Dissociating feels like building a jig-saw puzzle and you're missing a piece. It bothers you that the picture will never be complete despite how hard you try to look at it. The best thing to do is focus on how beautiful that incomplete picture can be." The text is attributed to Alpha.