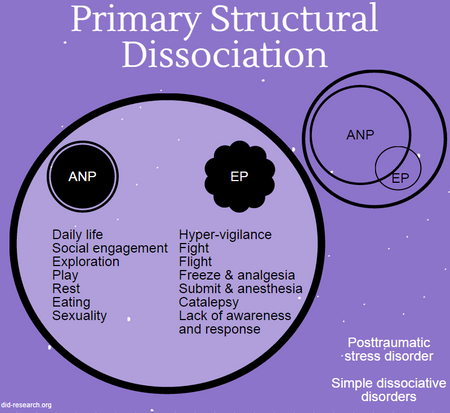 If an individual has a relatively safe and secure childhood, they will have the opportunity to fully integrate their personality, sense of self, and personal history. However, early development is not the only relevant factor in dissociation. A combination of genetics and trauma or extreme stress can cause an individual to dissociate later in life, leading to dissociative disorders such as depersonalization/derealization disorder or dissociative amnesia or to a trauma- and stress-related disorder, most notably posttraumatic stress disorder (PTSD). Early life trauma can lead to the same disorders when the individual is more resilient, when the trauma is not a betrayal-trauma, when the trauma is not repeated, or simply when the individual is not as genetically predisposed to dissociative responses. Regardless of when the dissociation of the personality occurs, primary structural dissociation is the problem.

According to the theory of structural dissociation, primary structural dissociation refers to the presence of one emotional part (EP) and one apparently normal part (ANP) within an individual. The ANP is the part responsible for daily life. The EP is dissociated from, or kept from integrating with, the ANP because it holds the traumatic experiences that could overwhelm the self and prevent the ANP from appropriately functioning in day to day life. That is to say, the fight, flight, freeze, and submission responses to trauma and the memories and internalized messages associated with them are dissociated, or not integrated, with the part of the personality that copes with normal life.

For those with PTSD, this allows the ANP to remain numb and avoidant towards traumatic materials except at times in which something triggers, or activates, the EP and brings it to the front of the mind in the form of dissociative flashbacks, hypervigilance, panic, irritability and recklessness, emotional outbursts, negative perceptions of the self and world, nightmares, or somatic symptoms. When the EP is activated alongside the ANP, the ANP experiences intrusions related to the traumatic materials contained by the EP.

When the EP in an individual with PTSD is so strongly activated that they gain complete conscious control at the expense of the ANP, they experience the traumatic experience in full as if it's occurring in the present. They are aware of nothing but the trauma. This effect is to some extent mitigated when EP and ANP are both aware at once, but the EP cannot remain grounded in the present to any meaningful extent on their own. All of their mental energy and resources are devoted towards futilely attempting to process the trauma that they experienced. When ANP have enough mental energy and resources of their own devoted to avoiding traumatic stimuli and preventing it from having an effect, this happens more rarely than when the ANP has been worn down or has fewer resources to spare. The ANP will likely have strongly negative reactions towards the EP even in the case of a full take-over by the EP of which the ANP is not consciously aware and cannot later recall.

It is not understood how structural dissociation encompasses simple dissociative disorders, but for this theory to be valid, it must in some way apply to all dissociative disorders (used here to mean all disorders in which dissociation is a primary characteristic whether it is the disorder's defining characteristic and classifier or not). It could be that for those with depersonalization/derealization disorder, the presence of an EP causes the ANP to experience a disconnect from aspects of themself or their internal processes or from their surroundings or the world around them. In this case, the EP causes negative and not positive symptoms (a loss of normal awareness and processing instead of a gain of trauma-related intrusions). This may represent a type of mental flight or a form of submission on the part of the EP. If the internal dissociation is caused by trauma, the EP might have internalized the disconnect between normal life and the trauma or have adapted the dissociation as a way to distance themselves from the trauma and so more easily allow the perpetrator to have their way without risking bodily harm to the individual.

For those with dissociative amnesia, the role of structural dissociation is far more easily explained. These individuals often develop symptoms of PTSD or actually develop PTSD when their amnesia for the traumatic event that triggered their dissociation ends. In this case, the ANP simply experiences a variable period of time without the interference of the EP that contains all conscious awareness of the trauma. Upon return of the EP, the individual experiences the same struggles as do individuals with PTSD.

It should be noted that some consider the presence of one ANP and one highly developed EP as a case of primary structural dissociation due to following a strict number based dichotomy. However, for the purposes of this website, individuals who have only one ANP and one EP but whose EP is experienced as a moderately differentiated entity or as a poorly differentiated entity for which the ANP is amnesiac (presenting as might a part for an individual with OSDD-1) are considered to have secondary structural dissociation. This is in order to avoid conflicting DSM-5 criteria for diagnoses. However, such presentations are rare. Even rarer is the individual who meets clinical criteria for DID yet has only two parts within their entire personality system. Again, such an individual is for the purpose of this website considered to have tertiary structural dissociation due to the complexity of the dissociative boundaries between the two parts.