Image: "And They're All Easily Amused" by Lotus Carroll

Dissociative identity disorder (DID) is often covert and difficult to notice, with only 5-6% of individuals with DID having a more florid presentation. Switching between alters is rarely accompanied by dramatic shifts in personality that are highlighted by changes in clothing, preferences, and accent. In contrast, systems often go to great lengths to hide their condition and will deny and downplay their symptoms as much as possible once diagnosed. Alters frequently manifest through passive influence instead of completely taking executive control, and many individuals with DID are amnesiac for their own amnesia and do not notice even when a full switch has occurred.

The DSM-5 warns that over 70% of outpatients with DID have attempted suicide. That some but not other alters may self harm or have suicidal thoughts or urges complicates treatment (American Psychiatric Association, 2013).1 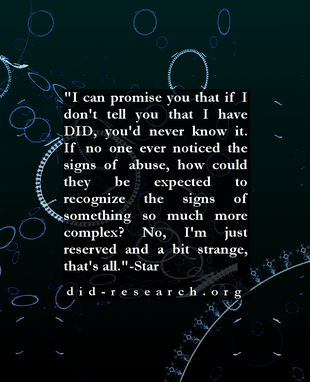 "I can promise you that if I don't tell you that I have DID, you'd never know it. There was a period of time where my symptoms were more obvious, but that was years ago. Now, I'm "high functioning," and no one notices a thing. If no one ever noticed the signs of abuse, how could they be expected to recognize the signs of something so much more complex? No, I'm just reserved and a bit strange, that's all."