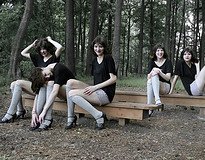 A system is a collection of alters within one body. The entirety of a dissociative identity disorder (DID) system includes all of the alters within one body. Research suggests that males average 12 alters and females average 15 alters. However, systems can range in size from 2 alters to 100s of alters, although in very large systems it is unlikely that all alters will front frequently. Instead, alters in large systems are likely to become active mostly when needed or triggered, and they often present in pairs or small groups.

Subsystems are systems within systems. There are two main types of subsystems. The first refers to separate internal groups within one larger system. In this case, two or more groups of alters might have developed separately, and they may or may not be aware of the other group(s). While groups may have good communication and co-consciousness among themselves, they may lose time when alters from other subsystems front, making communication through notes or sympathetic outsiders necessary. Different subsystems may reside in different locations in an internal world or may have non-overlapping internal worlds. They may exist to deal with different types of trauma and may not be aware of what other subsystems have experienced. Some subsystems might be entirely trauma locked; for example, someone with DID might have a group of alters who experience themselves as permanently trapped in an abusive environment, can only rarely communicate with the main group of alters, and cannot understand that the body is no longer trapped and hurting.

The second type of subsystem deals with alters who have their own alters (yes, it is like “alterception!”). These alters may or may not use the same internal presentation. That is to say, if Alter A has their own alters A1, A2, and A3, the other alters might experience all of the A alters as being different individuals who are only recognizable as Alter A because they all claim the same or a similar name and are never around at the same time. On the other hand, it is also possible that the other alters might experience all of the A alters as having to share one internal “body” and voice as outsiders experience the overall system as doing. Alters from this type of subsystem may or may not be aware of each other and may or may not have good communication. They may be very similar and differ mainly in regards to their age, function, or traits such as gender, or they may be complete alters in their own right.

Systems can also be affectionately referred to as collectives, internal families, clans, or crews.

"We have a group of alters that we refer to as "Deeper Alters" because it feels like they come from further back in the mind. They hold a lot of trauma that the rest of us can't stand to touch, and they don't usually communicate with the rest of us unless they have to. I know that they have their own place inside, but I don't know how to get to it or if the rest of us even could." 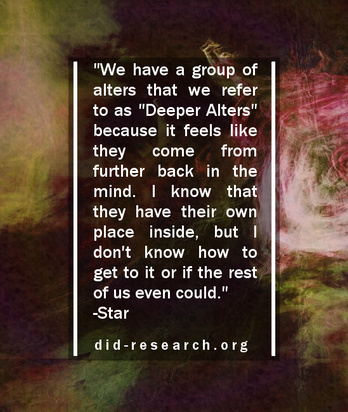