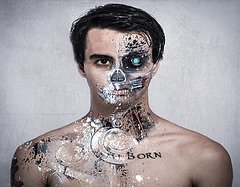 Image: "A Ghost in the Machine" by Michael Shaheen

Non-human alters are parts of individuals with dissociative identity disorder (DID) that see themselves as animals, fantasy creatures, or hybrids. Like all other alters, non-human alters are the result of trauma and an already severely dissociative mind. When a child is still young enough to first develop alters, they do not yet have a firm grasp of what is or is not possible, so they — and, by extension, the alters that are forming from their mind — might not understand that the entirety of themself is and always will be human. Once some alters have been formed as non-humans, this sets a precedent that allows splits later in life to take the same or similar forms because the brain understands how such a thing can be possible according to internal logic. There are many potential reasons for non-human alters to be created as they are.

For example, non-human alters such as wolf-hybrids, tigers, or dragons might be protectors who were created to take on an identity that reinforces their strength and willingness to protect what is theirs. Traumatized child alters might present as feral dogs in order to represent feeling or being treated as subhuman. Animalistic desires or desires that are commonly attributed to dark fantasy creatures might cause neglected or persecutory alters to present as lions or demons. Demon alters can also be due to religious abuse or a child constantly being told that they are possessed, evil, or going to hell. If a child is neglected but sees their parents lavishing affection onto the family’s pet cat, that child might have a feline alter because of the system’s desire to obtain their parents’ affection. Cat alters might also result from taking certain sayings regarding kittens literally due to certain types of abuse. A child that is heavily into fantasy might have alters who present as certain fantasy creatures that the child sees as being capable of protecting them from being hurt again or that the child finds comforting. Severely abused children might stop trusting humans entirely, and all of the alters present in their systems might be animalistic in order to avoid the cognitive dissonance and pain associated with identifying with the many people who hurt them. In contrast, some survivors might have only one or two non-human alters, and if they do not understand why those alters present as non-human, they might feel confused and ashamed and so try to hide those parts of themselves.

Less commonly, some systems have non-human alters that do not represent living creatures at all. Some alters experience such severe trauma that they cannot understand that it did not kill them, or some alters may be told by abusers that they are dead or about to die. These alters might see themselves as some type of undead or simply as dead. Other non-human alters might see themselves as robots that mindlessly obey abusers in order to avoid punishment or that function off of pure logic with no emotional capacity. In some cases, feeling so robotic or otherwise separate from humanity that one identifies as a creature other than human may not be associated with trauma at all but with an Autism Spectrum Disorder. In rare cases, object-like alters will be just that, representations of completely non-sentient objects or plants that cannot feel pain and so will not react to even extreme physical abuse.

The book "The Haunted Self: Structural Dissociation and the Treatment of Chronic Traumatization" by van der Hart, Nijenhuis, and Steele explains animal alters as a form of non-realization and substitute belief. This describes when an individual or alter rejects a painful truth (e.g., "I am a human child who was beaten by my father") and instead internalizes an alternate explanation (e.g., "I am a bad dog").

"I was created to be a fairy/pixie because one of our abusers was so into fairies and it was so important for her to like me. I usually don't tell people what I am though because I'm afraid it will make them not take me seriously and think I'm faking everything. It also makes me feel like I'm hers even though she hasn't been in our life anymore for several years. Other non-human alters within the system don't seem to have the same worry, and they seem happy to openly identify as what they are. We have a dog alter because sometimes we were punished like the family dogs were when they were naughty. We also have a dragon that's very central to the system because dragons are so fierce and powerful and protective and it felt like no one could harm us if we had a dragon on our side." 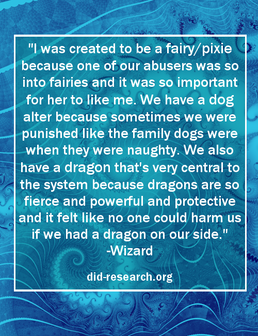 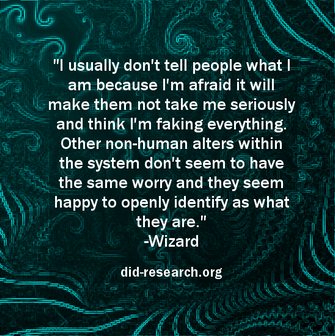