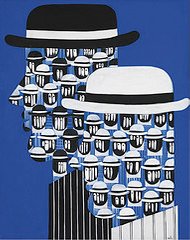 An alter is a dissociated self state that may be associated with either dissociative identity disorder (DID) or other specified dissociative disorder subtype 1 (OSDD-1). In cases of DID, most if not all alters can take recurrent executive control of the body in which they reside. Alters each have their own perception of self as a unique individual or entity and do not view themselves as only an aspect of a complete person. Externally, alters can display different degrees of emotional expressiveness, behave in different ways, and have different skills and abilities related to sensory-motor functioning. They have different thoughts, perceptions, and memories relating to themselves and to the world around them. They may perceive themselves as having an age, gender, sexuality, appearance, source, or even species that may or may not match that of the system's actual body, and they may or may not be aware of these discrepancies. (Some alters may see what they expect to see when they look into mirrors and are highly distressed to realize that the body that they are in does not match their internal perception of how they should look.) Often, alters have their own wants, needs, desires, and opinions. They may have psychological disorders and physiological reactions that are unique to them or experience the body’s psychological and physiological disorders in different ways or to different degrees than do other alters in the same body.

"The alters may be few or many, of various ages, including older than the body, same- or cross-gendered, hetero- or homosexual, alive or dead, with either or both coconsciousness and copresence to varying degrees, which may not be commutative (i.e., may be one-way), communicating not at all, or through hallucinations, or through direct thought transfer, manifesting different physiological signs in the body when out, clustered in various arrays of dyads, subgrouping, layers, purposes, and so on. Subhuman, animal, or imaginary alters are not uncommon, with likely links to children’s fantasy. When out, a given host or alter may appear globally to be mentally and behaviorally whole and normal or an exaggerated caricature or a single-function agent, and so on, but not necessarily congruent with the age and gender of the body" (Dell & O'Neil, 2009).1

Collectively, all of the alters in one body are known as a system.

“The kids emerged over time. Billy, the boisterous five-year-old, was at first the most dominant. But he slowly stood aside for JJ, the self-confident ten-year-old who appears when Alice is under stress and handles complicated situations like travelling on the Underground and meeting new people. The first entity to visit was the external voice of the Professor. But he had a choir of accomplices without names. So, how many actual alter personalities are there? I would say more than fifteen and less than thirty, a combination of protectors, persecutors and friends - my own family tree.”

Image transcript: Text in front of a dark background. The text reads: "I have an alter who was a persecutor for a long time. This alter saw herself as an abuser and carried an awful lot of self hate, but she wasn't really bad because her motives were to protect us. Eventually she learnt that hurting us wasn't necessary, so now she is trying to learn how to protect us in more healthy ways." The text is attributed to Wizard.