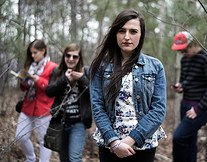 There are many functions and roles which are common for alters across the systems of individuals with dissociative identity disorder (DID) or other specified dissociative disorder, subtype 1 (OSDD-1). The most frequently reported major categories of alter functions are described below.

Core: Also known as the original or the original child, the core is considered by some to be the part first born to the body. Some see the core as the owner of the system, the part that has the most power and influence over other parts, and the most important part which the other parts were created to protect. Others see the core as nothing more than the self state that began to integrate sooner than other self states did. There is currently a debate over the existence of cores because it does not easily fit with the theory of structural dissociation. Not all systems have a part that could be identified as a core.

Host: The host is the alter that most commonly uses the body. Host alters collectively fall under the category of fronters, or alters who frequently “front” by taking control of the body and the front, conscious part of the mind. Host alters are responsible for most aspects of daily life, though teams of fronter alters might divide up daily life into more manageable and specialized units such as socialization, academia, work, and taking care of the body. If the host has spent years unaware of the existence of other alters and the trauma that created them, the host might have an extremely hard time coming to accept their DID. This alter might be used to viewing themselves as the only entity in their body and will likely at least at first view themselves as the core. This may or may not be correct. According to the theory of structural dissociation, all hosts are apparently normal parts.

Persecutor: Persecutors are alters that purposefully harm the body, system, host, core, or other alters, sabotage the system’s goals or healing, or work to assist the system’s abuser(s). Persecutors might hold self hatred or provide an outlet for internalized abusive and negative messages. They might believe that hurting the system or other alters is the only way to control them or teach them how to behave and so prevent further and more extreme abuse from outside abusers. They might be reenacting abuse or trying to ensure that future abuse isn’t more harmful due to being preceded by a period of relatively little abuse. Some persecutor alters are introjects of abusers and may or may not understand that they are not actually the abuser themselves. A relatively comprehensive source on persecutory alters, including abuser introjects, is "Understanding and Treating Dissociative Identity Disorder" by Howell. Kluft (in "A Clinician’s Understanding of Dissociation" from Dissociation and the Dissociative Disorders) also gives an in-depth case study on working with introjects of abusers.

Introject: Introjects are alters that are based off of an outside person or figure. Introjects may or may not see themselves as the individual that they represent. Introjects can be based off a family member or adult caretaker who supported the dissociative child and provided a positive influence on their life, serving as a source of potential positive messages for the child to internalize. Unfortunately, introjects can also be of abusers. Abusive introjects, unlike more positive introjects, provide no comfort or moral compass for the system. Instead, they reenact trauma and abuse, sometimes reinforcing abusers’ lessons to prevent further abuse and sometimes serving as a permanent component of an internal flashback. Although less common, introjects can also be based off of historical or fictional figures that the dissociative child found strong, courageous, heroic, or otherwise worthy of being emulated and internalized. Introjects that are based off of media or fantasy characters are clinically and academically acknowledged and have been mentioned in sources such as "The Haunted Self" by van der Hart, Nijenhuis, and Steele.

Memory Holder: Memory holders are alters that hold memories that are usually traumatic in nature so that other alters do not have to be confronted by the memories. In some cases, memory holders might hold memories of childhood innocence or of being loved by the system’s otherwise abusive or neglectful family. In these latter cases, the memory holder might serve to preserve these memories untainted by memories of trauma or to avoid confronting the system with the pain of what the abuse has cost them. Memory holders are highly associated with abuse takers, alters that experience trauma so that other alters do not have to. Memories holders are the prototypical emotional part in structural dissociation.

Gatekeeper: A gatekeeper is an alter that controls switching or access to front, access to an internal world or certain areas within it, or access to certain alters or memories. The existence of a gatekeeper is highly stabilizing for a system because gatekeepers can to some extent prevent unwanted switching, failure to switch when necessary, or failure to switch to the correct alter. They can help to prevent traumatic memories from bleeding from the alters who hold them to alters who could not yet handle them. Gatekeepers might police the boundaries between subsystems. Because gatekeepers have control over which alters have access to front, they themselves are often or always near front and so witness everything that happens to the system. They might experience vast amounts of abuse and might present as ageless, emotionless, and nonhuman as a way to process this and cope. Gatekeepers may or may not also serve as an internal self helper.

Fragment: A fragment is an alter that is not fully differentiated or developed. Fragments may exist to carry out a single function or job, to hold a single memory or emotion, or to represent a single idea. Depending on the way that individual systems use the term, a fragment might be any alter that could not survive if left on its own or that could not pass for a fully developed individual without the help of other alters. Fragments usually have not been exposed to enough complex, different, or interactive experiences to incorporate more into their sense of self and so become more developed and differentiated. It is possible for fragments to develop into more elaborate alters if the need arises or with further use.

It is important to remember that different systems have different needs, and systems may or may not have one or more alters for each of the above jobs. In smaller systems particularly, alters might hold multiple roles, some of which may even at first seem contradictory. For example, an alter might be persecutory to the system yet strive to protect it from outsiders. Other alters might hold roles that are specific to the system and would be difficult to define or generalize. Alters may hold unexpected roles, such as a child part handling finances or presenting in a persecutory manner. While fragments may be defined by their roles, other parts may be able to act in more complex and less reactive ways. The most well developed alters may be able to handle a wide variety of roles if this becomes necessary for the system's continued functioning. Finally, it should be remembered that an alter's roles can change over time.

"I have an alter who was a persecutor for a long time. A lot of people see persecutors as bad and sometimes even the persecutors themselves see themselves as bad. This alter saw herself as an abuser and carried an awful lot of self hate, but she wasn't bad really because her motives were to protect us even though she wasn't going about it in a very good way. She thought that if she punished us and scared us into 'keeping in line' then other people wouldn't have to hurt us. Eventually she learnt that hurting us wasn't necessary, so now she is trying to learn how to protect us in more healthy ways."

"I am so incredibly tired of people portraying protectors as dangerous. Our protectors saved our life. They stand up for us and ask for our boundaries to be maintained. It's like everyone's constantly telling us that that's not allowed, that we should have allowed the abuse to make us a vulnerable doormat." 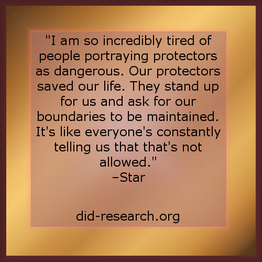 "In the literature on DID, various types of dissociative parts of the personality (that are not necessarily mutually exclusive) have been described (e.g., Boon & Van der Hart, 1995; Kluft, 1984, 1996a; Putnam, 1989; Ross, 1997). These include (1) host parts; (2) child parts; (3) protector and helper parts; (4) internal self helpers; (5) persecutor parts, based on introjects of perpetrators; (6) suicidal parts; (7) parts of the opposite sex; (8) promiscuous parts; (9) administrators and obsessive-compulsive parts; (10) substance abuse parts; (11) autistic and handicapped parts; (12) parts with special talents or skills; (13) anesthetic or analgesic parts; (14) imitators and imposters; (15) demons and spirits; (16) animals and objects such as trees and (17) parts belonging to a different race."