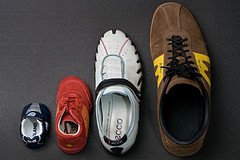 Alters in dissociative identity disorder (DID) often consider themselves to be a different age than the physical body of their system. For individuals with other specified dissociative disorder, subtype 1 (OSDD-1), the main difference between parts may be the age at which they identify or present. There are many possible explanations for this.

Alters which are younger than the body may be mentally frozen in time at the point of their creation or an experience of intense trauma. They may be stuck in an eternal flashback or refuse to accept that anything has changed since the period of time during which they experienced trauma. Some child alters have not been active since the body was young and so never had the opportunity to grow or develop. Other child alters might cling to a few happy childhood memories or represent a childlike innocence and sense of wonder that the actual traumatized child never got the chance to cherish. When the system was a child, child alters might have been tasked with going to school, making friends, or, when possible, encouraging parental affection so that the system as a whole could pass unnoticed and survive. Some child alters might even be protectors or persecutors whose age represents a meaningful period in their life or matches the age at which they split.

Child alters may or may not be aware of other alters, of the system as a whole, or of what it means that they are an alter. They may or may not be aware that the system was traumatized or that anything existed outside of the trauma, and they may not know or be able to accept that the body has grown older and is now subject to very different rules than when it was younger. Child alters might be shocked or disturbed by the adult body’s height, weight, or maturity, and they may find normal adult activities and responsibilities to be confusing or frightening. Conversely, in systems with few older parts but many younger parts, child alters might take on a great deal of responsibility and be capable of driving, doing taxes, or even helping the adult host to accept their traumatic past. The age of these young alters may or may not match their maturity or level of skills, and it may be that some child alters have skills and wisdom of those far beyond their years while still having the same childlike wants, needs, perceptions, and general enjoyments of children closer to their perceived age.

Alters may or may not age with the body. Some alters may age every year on the body’s birthday or on a specific date that holds meaning to them, often the date at which they first came into existence. Other alters may age sporadically as they process their trauma and come to accept the current date and the age of the body. Alters may age even if they were created to be older than the body.

Teenaged and adult alters may exist even in adolescents with DID. These alters may have served as an internal authority or parental figure for the dissociative child whose actual parents were abusive or could not be relied upon to stop the trauma. Older alters might be caretakers for child parts or protectors with more confidence, authority, and strength than would be associated with younger individuals. Other teenaged and adult alters might handle responsibilities that require more maturity, ability, or conscientiousness than most children are capable of. It is not uncommon for alters with important internal tasks, such as internal self helpers and gatekeepers, to present as adults, and they may disown any more juvenile thoughts, feelings, or desires in order to best complete their tasks. Similarly, persecutors are often teenagers or young adults, and most introjects, abusive or not, are adults.

Collectively, child alters are often called littles. Alters are considered littles until they present at around 8 years old. After that, many consider them to be middles until they present at around 12 or 13 years old. Teenage alters are considered to be those between 13 and either 18 or 21 years of age. Adult alters, or bigs, are those older than the internal teens.

Not all alters fall easily or neatly into one category of age. Some alters are what are known as age-sliders and have the ability to present at different ages depending on internal or external circumstances. Age-sliders may slide within a certain range of ages, may only present as certain fixed ages, or might experience some combination of these (for example, one alter might be 7-12, another might be 6, 9, or 17, and a third might be either 7-9 or 12-16). Alters that age-slide may or may not have a different appearance, disposition, job, or set of memories for each of their ages. In some cases, it might be more accurate to identify an age-slider as an alter with a subsystem—that is, an alter with their own dissociated parts, in this case parts that represent that alter at different ages.

Finally, some alters are ageless and cannot identify with any specific age. Some of these alters might still identify with a broad category of age—for example, a fun-loving alter might simply be an indiscriminate teenager—while others might feel that such concepts do not apply to them. Ageless alters are often protectors, gatekeepers, or internal self helpers that are emotionally disconnected and have a vague sense of self beyond their role within the system. Ageless alters may or may not identify with a gender or general appearance. In contrast, some alters may not be truly ageless but instead feel so ancient that human ages no longer apply to them. Many of the characteristics often found in ageless alters also apply to them, though they often have a stronger sense of self and more uniquely identifying traits.

We don't often use exact ages because it's more or less a guess for us. For some alters it's easy, because they age with the body or are stuck at the age they were created. The rest of us either claim an age that feels appropriate, or we give estimates (“somewhere between 20 and 25”, “a typical teenager” or “a young child”).