Iatrogenic and Sociocognitive Models of DID 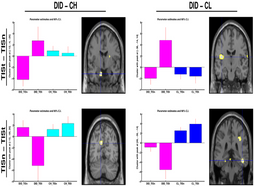 Image Description: The brain areas indicated with the blue cross (i.e. the peak voxel) are (from top left to bottom right):

the left amygdala, the left insula, the left precuneus, and the right occipitotemporal sulcus. These areas have the most significant rCBF differences between the dissociative identity disorder patients and high and low fantasy prone DID simulating controls (CH and CL respectively) and is shown both in directionality, i.e. the bar graphs, and location, i.e. shown on a coronal overlay (left in the picture is left in the brain). Results show the differential processing of the trauma-related text versus the neutral text within the TIS, when comparing the DID groups to the high fantasy prone control group (left) and low fantasy prone control group (right).

Fact or Factitious? A Psychobiological Study of Authentic and Simulated Dissociative Identity States

Iatrogenic conditions are those that are caused by a medical examination or treatment. Iatrogenic dissociative identity disorder is DID that results from suggestion from or coercion by a mental health professional. Likewise, sociocognitive conditions are those that are caused by internalizing symptoms seen in the media, in friends, in family members, online, or in other social settings. Though clinicians are always careful to avoid causing iatrogenic disorders, DID is one of the only disorders that routinely gets accused of being sociocognitive in nature in such a way as to protest that non-sociocognitive DID exists. While there are cases of both iatrogenic and sociocognitive DID, most cases of DID are thought to be traumagenic, or the result of long term or repeated childhood trauma. That many cases of DID cannot be explained by either an iatrogenic or sociocognitive position is supported by many studies.

One major support for DID as a traumagenic disorder is the strong association between DID and childhood trauma. DID patients have smaller hippocampal and amygdalar glands, something seen in those who were abused as children and have posttraumatic stress disorder (PTSD) (Vermetten, Schmahl, Linder, Loewenstein, & Bremme, 2006).1 As well, one study confirmed childhood abuse in eight out of nine cases of DID and all twelve cases of DDNOS (OSDD-1) examined (Coons, 1994).2 At least 79% of those with DID meet the criteria for PTSD (Ellason, Ross, & Fuchs, 1996)3, though other studies place the number at 89% (Brand et al., 2009).4 Another study found that 98.1% of individuals with DID experienced child abuse (Ellason & Ross, 1997).5 Despite these findings, DID cannot be said to be the same as PTSD. Individuals with DID and co-morbid PTSD have larger putamen and pallidum volumes compared to individuals with only PTSD with these volumes being positively correlated with severity of dissociative symptoms. Severity of dissociative symptoms is also negatively correlated with volume of the inferior parietal cortex (Chalavi et al., 2015).6

Another important point is the difference between trauma-oriented and non-trauma-oriented alters. The current theory for the formation of DID, the theory of structural dissociation, relies on the existence of both trauma oriented emotional parts (EP) and daily life oriented apparently normal parts (ANP), and various studies reinforce that these parts are distinct. It's been shown that ANP (also called neutral identity states, or NIS) and EP (also called trauma-related identity states, or TIS) have different neural resting state activity, with EP being more likely to activate brain regions involved in self-referencing and sensorimotor actions (Schlumpf et al., 2014).7 When exposed to trauma scripts, NIS activate areas in the cerebral cortex while TIS activate subcortical areas. NIS brain network activation patterns are similar to those displayed by healthy individuals who are emotionally suppressing unwanted memories. In contrast, TIS brain network activation patterns indicate unsuppressed memory retrieval associated with acute stress. This supports that TIS but not NIS relate traumatic autobiographical memories to themselves (Reinders, Willemsen, Vos, Boer, & Nijenhuis, 2012).8 Similarly, EP compared to ANP are over-reactive towards angry and neutral preconsciously perceived faces and in response demonstrate more activation of the right parahippocampal gyrus, an area of the brain associated with recall of autobiographical memories and with re-experiencing symptoms for individuals with PTSD (Schlumpf et al., 2013).9

There is also evidence that DID is not iatrogenic. Some of the symptoms of DID might become visible only after diagnosis or treatment, but many are present before this point. One study finds that 73% of individuals with DID have corroboration for having experienced dissociative symptoms prior to receiving a diagnosis of DID and 67% for having experienced dissociative symptoms prior to therapy (Gleaves, Hernandez, & Warner, 1999).9 As well, appropriate DID treatment is unlikely to cause additional or worsened dissociative symptoms as it measurably leads to patient improvement. It lowers self-injurious behaviors, leads to fewer hospitalizations, and increases adaptive functioning. As well, self reports of DID patients in the later stages of treatment indicate lower levels of dissociation, PTSD, and distress (Brand et al., 2009).4 Another study examines 135 patients with DID after two years of treatment, and it shows that treatment leads to improvement on Schneiderian first rank symptoms, mood and anxiety disorder symptoms, dissociative symptoms, and somatization as well as to less psychiatric medication being prescribed. Integration is associated with more signification improvement (Ellason & Ross, 1997).5 Yet another study validates these results with self reports of decreased levels of dissociation, posttraumatic stress disorder symptoms, general distress, drug use, physical pain, and depression after 30 months of treatment in addition to increased socializing, attending school or volunteering, and feeling good. The patient reports were confirmed by therapist reports of less self-injurious behavior, fewer hospitalizations, and increased global assessment of functioning scores and adaptive capacities over time (Brand et al., 2012).10

More evidence that DID is neither iatrogenic nor sociocognitive lies in the blend of underlying symptoms that the disorder contains that one would not learn about through the media, the vast majority of professionals, or casual online resources. Before the publication of the study "A New Model of Dissociative Identity Disorder" by Paul F. Dell in 2006, many of these symptoms were unknown, not associated with DID, or not clinically associated with DID, yet the study finds that a strong majority of individuals with DID experience all of the symptoms tested.11

It should be noted that even traumagenic DID can be influenced by therapists, the media, or friends. Cultural influences on DID are reflected in the number and types of alters present within systems from different countries, conversion symptoms being more common for dissociative individuals in non-Western societies, and how well and the ways in which one functions and copes with the disorder before and after diagnosis. However, many disorders are influenced by one's environment, including disorders that are well known to have a genetic or traumatic origin. There is a reason that cultural considerations are mentioned for every disorder in the DSM-5. As well, a journal oriented towards both psychiatry and law ruled in 1999 that suggestive influences in therapy have not been proven to any satisfactory degree to be capable of creating DID. While the frequency and type of alter behavior can be influenced in patients who already have DID, this is not the same as alters being created where there were none before. The same article addresses recantations of DID, attributing some of these accusations of iatrogenesis to influences of false memory syndrome proponents after the end of treatment and others to factitious behaviors on the part of the patient (Daniel, Edward, & Alan, 1999).12

Finally, it should be noted that some cases of DID are not traumagenic, iatrogenic, or sociocognitive but pseudogenic (factitious or malingered). This final type of "DID" is addressed here. That pseudogenic DID can be distinguished from genuine DID also supports that DID is caused by more than outside influences as it shows that iatrogenic or sociocognitive influences are not enough for an individual to sufficiently feign DID. There are multiple red flags that can separate pseudogenic from genuine DID, and many of these indicators relate to a non-traumagenic presentation of DID. For example, red flags include reporting abuse that is inconsistent with one's medical history, a lack of co-morbid PTSD, and dramatic, stereotypical, or bizarre symptoms (Howell, 2011).13 The Structured Clinical Interview (SCID-D) is an instrument used to diagnose DID and does well at differentiating between genuine and feigned DID (Welburn et. al, 2003).14 Both the SCID-D and MID are also good at catching cases of "imitative DID," a phenomena in which individuals with "cluster B personality disorder profiles [assume] the social role of a DID trauma survivor" (Brand, McNary, Loewenstein, Kolos, & Barr, 2006).15 Imitative DID may account for the majority of sociocognitive or iatrogenic cases of DID as individuals with imitative DID truly believe that they have DID and may have had this false belief reinforced by therapists or other concerned individuals. They may genuinely suffer from dissociative symptoms, though their overall profiles fail to match those of actual DID individuals, particularly in regards to more subtle symptoms. Those with imitative DID often show less shame or conflict regarding their supposed DID diagnosis (Brand, McNary, Loewenstein, Kolos, & Barr, 2006)15 and so can be differentiated from individuals with genuine traumagenic DID.